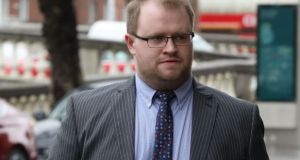 A provincial newspaper editor’s rights under the Constitution and European Convention on Human Rights were breached when gardaí got a search warrant for his home and seized his phone, it has been claimed before the High Court.

The seizure took place as part of an investigation into violence following a home repossession in Strokestown, Co Roscommon, in December 2018.

Oncor Ventures, trading as Strokestown-based The Democrat, and its editor Emmett Corcoran, are seeking, among other things, High Court declarations that the search warrant issued by District Judge James Faughnan in December 2018 was invalid and should be quashed.

It is claimed the district judge was not informed Mr Corcoran had invoked journalistic privilege at a voluntary meeting with gardaí before they sought the search warrant.

The Garda claimed there was no such privilege “known to law”, the court heard.

Mr Corcoran also wants the phone returned and a declaration, in issuing such a warrant, there is a heavy onus to have regard to journalistic privilege.

In April last year, Mr Corcoran and Oncor, of which he is a director of, got an injunction preventing the Commissioner going through data on his phone which had been seized when gardaí arrived with the warrant at his home.

Gardaí wanted it as part of evidence in their investigation because Mr Corcoran was one of the first people to arrive at the scene of the repossession incident in Strokestown when a number of vehicles were set on fire by armed and masked men. Security men were also assaulted during the incident.

Mr Corcoran. who shot video before the fire brigade arrived, later refused to say who had tipped him off, citing journalistic privilege, but says he did provide all the footage he shot.

Opening the case on Tuesday, his counsel Michael McDowell SC said the phone is now in the custody of an independent member of An Garda Síochána.

The application for the search warrant was made to Judge Faughan who had already recused himself from proceedings related to the December 2018 incident, counsel said.

That application by gardaí was fundamentally flawed because that same judge was not informed journalistic privilege in relation to material on the phone was being invoked, he said.

While Mr Corcoran was quite happy to provide gardaí with the video evidence, he did not want to disclose who tipped him off, he said.

Mr McDowell said the EU Council of Ministers had given guidelines for member States to ensure there are protective measures in place to ensure those investigating criminal or civil matters have a clear statutory framework in which search and seizure can be sought to protect journalistic rights and privacy.

While England has the Police and Criminal Evidence Act which defines “journalistic material”, it has not been the subject of any statutory formulation in this country, he said.

The case resumes on Thursday before Mr Justice Garret Simons.