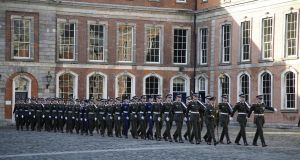 The Minister for Defence is not entitled to demand that Army recruits commit to serve 12 years in the force on enlistment, the High Court has ruled. File photograph: Nick Bradshaw/The Irish Times.

The Minister for Defence is not entitled to demand that Army recruits commit to serve 12 years in the force on enlistment, the High Court has ruled.

Ms Justice Miriam O’Regan made the ruling in a challenge by a Pakistani man to the Minister’s refusal to admit him as a recruit because he only has permission to stay in Ireland until June 2020.

The judge, while finding against the Minister in relation to the 12-year service requirement, rejected the man’s challenge because it was brought outside the relevant time limit required by court rules.

The man enlisted with the Naval Service in December 2016 but left a month later as he was confident of getting a place in the Army, which was his preference.

Now aged 23, he came to Ireland as an unaccompanied minor in 2012 and later secured subsidiary protection, a status afforded to people who do not qualify as refugees.

He secured permission to remain here for three years and this was later extended to June 2020.

In April 2017, he was invited to take part in an Army enlistment procedure at the Curragh Camp but was told he was ineligible because he needed a minimum of 12 years permission to reside in the State.

In his High Court challenge, it was argued there was no regulatory provision precluding him from being inducted into the Defence Forces and the Minister’s decision was made on the basis of an unpublished or publicly unavailable document. The Minister disputed the claims.

The Minister, in a letter sent before the challenge to the man’s solicitors, also said his swearing in to the Naval Service had been “administratively incorrect” as he failed to satisfy induction criteria for that service which also required a 12-year commitment.

Ms Justice O’Regan said the 1954 Defence Act does not support the Minister’s claim a recruit must guarantee to serve for a minimum of 12 years. The Act also says an enlisted soldier might be discharged if they become a member of parliament, she said.

Rejecting the man’s case on grounds of delay in bringing it, she said Superior Court rules provide judicial review be brought within three months from the date when grounds for the application arose.

In certain circumstances, the court can extend that period but sufficient evidence had not been provided to enable the court to extend time in this case, she said. She therefore refused his application.