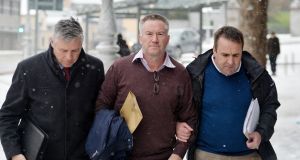 Former solicitor Michael Lynn (centre) is escorted into court in Dublin after arriving back in Ireland from Brazil last year. Photograph: Alan Betson

Former solicitor Michael Lynn, who is on bail awaiting trial on multi-million euro theft charges, has brought a High Court challenge over a refusal to grant him disability benefit.

He claims he suffered severe mental trauma while being held for four and a half years in a Brazilian prison.

Mr Lynn (50) claims he needs ongoing treatment because of the conditions and treatment he endured in Cotel remand prison, Recife. He says that included extortion and constant threats, including a threat by other prisoners to kill him.

He was also held in a small cell with up to 50 other prisoners, some of whom were openly using drugs, he claims. On one occasion, another prisoner sitting near him was stabbed.

He lost 15kg in weight, showed signs of shortness of breath and was later diagnosed with a lung condition.

He claims the Irish Embassy in Brazil only visited him three times and showed a lack of concern for him. He says it was only when the Dutch Embassy intervened the got a visit from Irish embassy staff.

His lawyers were given leave on Monday by the High Court to challenge the refusal of the Minister for Employment Affairs and Social Protection to approve disability benefit for him.

He is currently on social welfare and remains on bail with his trial on theft charges due to take place next year.

He was extradited from Brazil last year on a number of charges including the theft of €4.1m from Irish Nationwide Building Society on April 4th, 2007 and €3.6m from Ulster Bank on October 20th, 2006.

He was eventually granted €100,000 independent bail with conditions including that he sign on daily at a Garda station and observe a 9pm to 6am curfew .

He must also reside at Carton Square, Maynooth, Co Kildare, where he lives with his wife Brid Murphy who returned from Brazil last year with their four children.

Earlier this year, the High Court heard, Mr Lynn made an application for disability benefit on grounds he was suffering severe mental trauma.

One of the grounds for granting disability benefit is that a person must be a habitual resident of the State for a year and Mr Lynn had not met this criterion, the court heard.

His application was refused last March. He applied for a review of that decision but that was also refused he says, by the same person, who made the original decision.

When he asked for a further review by an independent person, that was also refused.

He says while his application was examined by a medical assessor, he was not asked to attend this assessor and did not know whether the assessor involved was a psychiatrist or other medical professional.

Mr Lynn seeks orders quashing the decision to refuse his application on the basis that no meaningful explanation was given for it. It is also because he was never examined by the department’s medical assessor even though there were ample basis from reports to show what he was suffering from, it is claimed

He also seeks declarations there was a breach of fair procedures. He further seeks an order compelling the Minister to conduct a review by an independent person.

His counsel also said he is concerned the department will cut off his social welfare payments which he has been receiving so far on the basis he is unfit for work.

Mr Justice Michael McGrath granted the one-side only represented application from his lawyers for leave to challenge the refusal in judicial review.

The judge refused to grant a stay on the department stopping his social welfare on the basis that related to what might happen. Mr Lynn’s lawyers would have to make such an application on notice to the department, he said.

The case comes back in October.