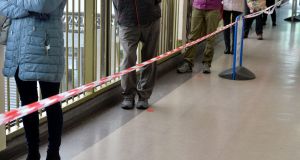 A man has brought a High Court challenge after he was arrested following a row about social distancing with a woman in a bank queue. File photograph: Alan Betson/The Irish Times.

A man has brought a High Court challenge after he was arrested following a row about social distancing with a woman in a bank queue.

Marko Topol allegedly told the woman he had coronavirus and would cough on her.

Mr Topol, a chef from Croatia, is challenging the decision to refuse him bail over what he felt was doing nothing more than becoming involved in an argument.

He was in the queue last Friday when an argument over social distancing allegedly developed between him and the woman, who accused him of being too close to her.

She claimed he told her he had the virus and would cough on her, at which point she left the bank.

He told his solicitor he did not tell her he had coronavirus or any other illness and he had not threatened to cough on her anything similar.

A short time later, a garda arrived and arrested Mr Topol for alleged threatening behaviour with intent to provoke a breach of the peace. He was brought before Dublin District Court that evening and Judge Miriam Walsh refused bail after a prosecuting garda objected because of the seriousness of the charge.

Mr Topol, who says he has never been in trouble before and works in a well-known restaurant, has been in Cloverhill remand prison since Friday.

A High Court judicial review application seeking to quash the refusal of bail was adjourned until Tuesday to allow the Director of Public Prosecutions (DPP) contact the garda involved.

Mr Justice Denis McDonald said, while mindful Mr Topol was innocent until proven guilty, having regard to the significance of the offence and that public order must be maintained at this time, the State must be given time to address the claims made on Mr Topol’s behalf.

Michael Kelleher, for the accused, said in an affidavit that his client, whom he described as upset and afraid following his arrest, says the allegation against him is false and he was “unwavering in this”.

Breach of the peace is not a serious charge but it appeared the district court was taking a very hard line with cases connected to the virus, he said.

“The presumption of innocence cannot be discarded because of the current emergency,” he said.

This was particularly so in circumstances where Mr Kelleher said he believes the State prisons are having difficulty implementing Government safety guidelines such as social distancing.

Mr Justice McDonald, after hearing submissions on behalf of Mr Topol and the DPP, said he appreciated the State had very little time to investigate what transpired and must be given an opportunity to do so. He would resume the hearing on Tuesday.

Earlier, when granting leave for Mr Topol’s judicial review, the judge, while stressing he was making his remarks generally and they were not related to Mr Topol, said it is “of great concern” that some people are threatening assault by coughing. He said he wondered whether, in such cases, more serious charges need to be advanced than public order offences.