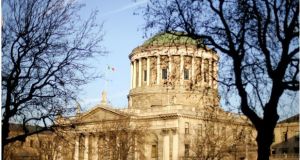 The man, who has never been in trouble before, had been in custody since last Friday.

A man arrested and detained in custody following a row about social distancing in a bank queue, and an alleged threat to cough on a woman, has secured bail from the High Court.

Mr Justice Denis McDonald said, when granting bail to Marko Topol, the DPP should consider giving guidance as to the types of charges that should be brought in cases like this and whether more serious charges should be brought.

Mr Topol, a Croatian working as chef here, denies he told a woman in the AIB O’Connell Street, Dublin, he had Coronavirus and would cough on her after she complained he was standing too close in the queue.

She left the bank and a garda arrived, arrested him and charged him with threatening behaviour with intent to provoke a breach of the peace.

Mr Topol, who has never been in trouble before, had been in custody since last Friday.

His lawyers brought High Court judicial review proceedings seeking to quash the refusal of bail by the District Court on grounds including the charge against him was not serious and contravened the principle of the presumption of innocence until proven guilty.

The DPP opposed the application saying there was another avenue open to Mr Topol through the High Court bail list.

On Tuesday, Mr Justice McDonald said he was conscious of the existence of alternative remedies.

However, a decision to refuse bail can be subject of judicial review if a District Judge is shown to act in excess of jurisdiction and where the applicant has a good prospect of success, he said.

Irrespective of the outcome of the judicial review, he said a huge tribute must be paid to gardai and District Judges who have fearlessly discharged their duties during this crisis for the benefit of the community. They deserved enormous thanks for everyday ensuring that public order is preserved.

Coughing or attempting to cough on others at this time is not just reprehensible and disgusting but a danger to others and likely to cause panic and fear, he said.

It is right that those who do it should be prosecuted with the full rigours of the law and appropriate sentences imposed when convicted, he said.

On the other hand, all courts are bound by Supreme Court principles that the presumption of innocence must always be borne in mind unless someone is caught red handed, he said.

In this case, Mr Topol was arrested after the event and no witnesses were called at the bail hearing although that would be unusual, the judge said. The court heard he is adamant he never said he had the virus or threatened to cough on the woman and he himself considered such behaviour disgusting and dangerous.

The judge said the fundamental test for bail was whether he was a flight risk.

Having listened to a recording of the District Court proceedings, it was clear that everyone, including Mr Topol after a “shaky start in attempting to smile” (when he first appeared in the dock) acknowledged it was a serious matter.

In refusing bail, the District Judge did not make any ruling he was a flight risk but said it was a serious charge. The recording did not show flight risk was considered, he said.

In circumstances where Mr Topol has a good prospect of succeeding in his judicial review, Mr Justice McDonald said he was prepared to grant bail on conditions that he enter his own bond of €500, abide by Government and statutory guidelines on the Covid-19 crisis, surrender his passport or other travel document, and provide his mobile phone details to the prosecuting garda within 24 hours of his release.

He said the judicial review proceedings could come back to the High Court in May.