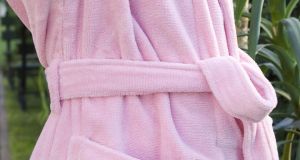 A man robbed a Belfast golf club wearing a pink dressing gown, a court was told on Thursday.

At the High Court in Belfast, prosecutors said one of two men accused of stealing cash from Ormeau Golf Club last week was identified on CCTV footage wearing the robe.

Details emerged as bail was refused to his co-defendant.

Gerard Magee, of Parkend Street in the city, faces a count of burglary with intent to steal over the break-in. The 34-year-old is further charged with the theft of three packets of make-up foundation from a Boots store three days later.

Conor Maguire, prosecuting, said an Ormeau Golf Club representative reported £70 had been taken from a cash float in the bar on February 5th. Money was also stolen from a charity box, while two lockers in the male changing room had been forced open.

Police examined CCTV footage and saw two men breaking into the premises at around 8.30am. Officers were said to have recognised Magee from the images.

On February 10th police returned to the golf club to be shown items of clothing. “On further viewing of the CCTV footage a co-accused is clearly seen wearing a pink dressing gown while committing the burglary,” said Mr Maguire.

Magee was arrested and charged with the raid and the separate shoplifting incident at Boots.

Defence counsel Conn O’Neill argued that there were question marks over the validity of recognition evidence in the case.