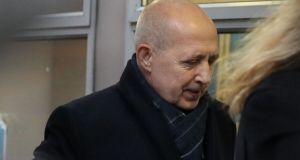 Darius Pobog Gadzinski (57) claims he has chronic back pain and has not worked since he hurt himself while attempting to move the onions from a 2m- high pallet five years ago. Photograph: Collins Courts.

A supermarket worker who claims he pulled his back while lifting a 20kg bag of onions has sued for damages in the High Court.

Darius Pobog Gadzinski (57) claims he has chronic back pain and has not worked since he hurt himself while attempting to move the onions from a 2m- high pallet five years ago.

Mr Gadzinski, of Killegland Hall, Ashbourne, Co Meath, has sued his then employer, Lidl Ireland, as a result of the incdent in its Ashbourne store on October 24th, 2014.

He alleges a failure to instruct him or his fellow employees in the correct operational procedures for the safe carrying out of his duties and that he was permitted carry an object so heavy as to be likely to cause him injury.

The claims are denied. Mr Justice Michael Hanna was told Mr Gadzinski had started working for Lidl in Ashbourne in April 2008 as a store assistant and packer. His early morning job involved helping fill the shelves with products before the store opened to the public.

Rónón Dolan SC, for Mr Gadzinski, said that on the day of the incident, his client had wheeled out a shrink-wrapped pallet from the warehouse to the store.

A bag containing 20 individual bags of onions, each weighing 1kg, was loosely placed on top of the pallet, counsel said.

Mr Gadzinski “had no choice but to be standing on his tip-toes when he reached up with both hands to lift off the bag”.

“Such was the weight that he will describe feeling a pull or drag in his back as it wrenched his back downwards as he placed it on the ground,” counsel said.

Mr Dolan said Mr Gadzinski reported what had happened and then went home and took some painkillers. He tried to return to work but the pain was too great and he finished early, he said.

Mr Gadzinski attended his GP and a local medical centre and received pain killing injections, as well as physiotherapy, the court heard.

Scans revealed he will require surgery at two points in his spine to help cure the resulting chronic pain, Mr Dolan said.

Daughter denied she left house to get ‘permanent peace’ from mother 19:00
Political parties rule out student loans to fund third level 18:35
Homeless woman wins appeal over failure to pay her Jobseeker’s Allowance 18:25
Boy who fell off a stage at a wedding is awarded €35,000 18:16
Higgins says claim UN criticism of Israel is anti-Semitic ‘inappropriate’ 18:16