Limerick man may face extradition to US on wildlife trafficking charges

Three charges include trading in horns of endangered black rhinoceros 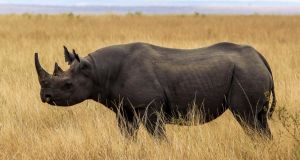 The horns at the centre of the charges are from the endangered black rhino. Photograph: iStock

A 30-year-old Irish man, wanted in the United States on charges of wildlife trafficking, including in the horns of endangered rhinoceroses, has appeared before the High Court on foot of an extradition request.

John Slattery, otherwise known as John Flynn, from Old Barrack View, Fairhill, Rathkeale, Co Limerick, is accused of committing three offences in the US relating to wildlife trafficking. He was remanded in custody to Cloverhill Prison.

Mr Slattery, who was represented by barrister Mark Lynam, was arrested by Sgt Jim Kirwan of the Garda Extradition Unit and brought before the Dublin court. Each of three counts with which he is charged carries a maximum of five years’ imprisonment in the US.

Mr Justice Bernard Barton was told the horns at the centre of the charges are from the endangered black rhino.

The US authorities claim that in September 2010 Slattery and two others travelled from London to a taxidermy shop in Austin, Texas, to buy the horns. Initially they had been unable to buy the horns because they were not residents. The following day, it is claimed, they enlisted the help of a Texas resident, who acted successfully as their buyer.

It was claimed they bought the horns for $18,000 and had then travelled to New York after allegedly falsifying an endangered species bill of sale. It was alleged that the document provided with the horns included a false and fictitious Fish and Wildlife Service Emblem.

The men, allegedly including Mr Slattery, sold the horns for $50,000, at the same time providing a modified bill of sale to make it look like the transaction in Texas had been legal. Shortly afterwards, it was further alleged, Mr Slattery offered the same individual in New York 10 rhino horns for sale.

The court was told that between April 2010 and November 2010 Mr Slattery allegedly bought two further horns from an individual for $10,000.

It was claimed in sworn affidavits opened to the court that in 2010 Mr Slattery and the others travelled to an auction house in Macon, Missouri, where they allegedly obtained a consignment of rhino horns from endangered white and black rhinos. In early 2011 six of these horns had been sold for $260,000.

Sgt Jim Kirwan told the court the State was not consenting to Mr Slattery being released on bail. The court also heard Mr Slattery holds an Irish passport and in 2015 changed his name by deed poll to John Flynn. Mr Slattery did not speak during the brief hearing, which was also attended by members of his family.

His counsel, Mr Lynam, told the court his client was not making a bail application at this point of time and that any such application would be “complex”.

Mr Justice Barton, on being satisfied that Mr Slattery was the person whose surrender was being sought by the US authorities, remanded Mr Slattery in custody to a date early next month.

Restrictions on Kildare, Laois, Offaly could be extended to other counties, NPHET warns 09:40
DoneDeal suspends adverts for sale of dogs after spate of dog thefts 06:00
Half of people in direct provision ‘unable’ to social distance 04:05
Urban congestion charges under consideration 04:05
Conspiracy theories ‘may hamper’ roll-out of 5G 03:56

1 Midlands lockdown: ‘Why shut down Offaly and leave Dublin open?’
2 Sand-hued cyclepaths changing the face of south Dublin coast
3 Restrictions on Kildare, Laois, Offaly could be extended to other counties, NPHET warns
4 Meat plant clusters may be down to softly-softly approach
5 Midlands lockdown: Movement restrictions in place for residents of Kildare, Laois and Offaly
Real news has value SUBSCRIBE