Landlords behind forced evictions ordered to hand over properties 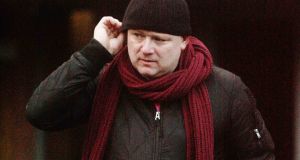 A fund-appointed receiver has obtained injunctions against the owners of several Dublin properties following reports last weekend that tenants were forcibly removed from one of the premises.

Some the properties were found in a poor condition and the receiver’s representative found a mother and her daughter living in a shed beside one of them, the court was told.

At the High Court on Wednesday, receiver Ken Fennell secured interim injunctions against Paul Howard and Una McClean preventing them interfering with a number of apartments in Dublin’s Mountjoy Square as well as properties in Harold’s Cross, and in Kilnamanagh, Dublin 24.

Stephen Byrne, for the receiver, said Mr Fennell was bringing the action to prevent ongoing interference with the receivership and over concerns for the safety of tenants who have a right to be in the properties.

Mr Fennell, of Deloitte, says there has been a deliberate attempt to thwart the receivership.

The orders were granted, on an ex-parte basis, by Ms Justice Caroline Costello who returned the matter to Friday.

Earlier, Mr Byrne said the receiver was appointed by Promontoria (Oyster) DAC after it had in 2016 acquired loans advanced by First Active to Mr Howard and Ms McClean, with an address at Larkfield Avenue, Harold’s Cross, Dublin.

Counsel said Mr Howard and Ms McClean, who are believed to be a couple, jointly owe the fund €1.4 million while Mr Howard owes an additional €400,000.

Talks between the parties over the debts had not been successful and that resulted in the receiver being appointed, he said.

In correspondence with Mr Fennell, Mr Howard used “pseudo legal language” to dispute the validity of the receivership, counsel said.

The “genesis” of the injunction application was reports in the media last weekend that tenants were forcibly removed from one of the apartments in Mountjoy Square by Mr Howard and others, with one tenant needing hospital treatment.

This was being investigated by the receiver and was of concern and an inspection revealed the property was significantly damaged, counsel said.

Counsel said there were other incidents of concern and Mr Fennell had discovered Mr Howard had “stolen a march” on the receiver and had sought and obtained early payment of rent from some of the tenants at the properties.

That money should have been paid to the receiver to reduce the defendants’ indebtedness to the fund,counsel said.

There had also been an attempt by Mr Howard and another person to remove a representative of the receiver from one of the properties, he said. Gardaí were called but, after they left, the locks on the premises were changed by Mr Howard, he added.