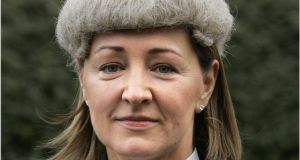 Ms Justice Reynolds adjourned the matter to early next week after being informed a related matter, where lawyers for David and Geraldine McGann are seeking permission to cease representing them, is due to be heard. Photograph: Dara Mac Dónaill

KBC Bank is claiming that members of a Co Roscommon family are in contempt of a High Court order requiring them to leave a farm at the centre of a controversial eviction.

Ms Justice Leonie Reynolds was told on Friday by Rossa Fanning SC, for KBC, the bank is to seek orders to have siblings Michael Anthony, David and Geraldine McGann brought before the court arising from the alleged contempt.

KBC claims the McCanns have not complied with a court order directing them vacate their family home at Falsk, near Strokestown by November 12th last and that they remain on the property. Mr Fanning outlined the bank, as a result, wants to bring a motion that could result in the McGanns being jailed for an alleged contempt of court.

Ms Justice Reynolds adjourned the matter to early next week after being informed a related matter, where lawyers for David and Geraldine McGann are seeking permission to cease representing them, is due to be heard then. Both matters will be considered together, the judge said.

Last October, Mr Justice Senan Allen ruled that KBC had obtained and executed a valid possession order over the property and the McGanns had no entitlement to be there and were trespassers. He granted an injunction requiring the McGanns to leave the property by November 12th. The injunction application was opposed by the McGanns. Lawyers for Geraldine McGann, who the court heard occasionally stays at the house, and David McGann, who has lived in the property all his life, had argued the order should be refused. Michael Anthony McGann, who also lives at the property, was not in court and was not represented during the hearing.

The case centres on events in December 2018 when the McGann family were evicted from the farm on foot of a repossession order KBC obtained in 2012. The eviction gained national media attention after private security operatives were forced from the property by a group of masked men. Gardaí subsequently launched an investigation after security personnel were attacked, several of whom required medical treatment. Several vehicles were burnt and a dog had to be put down due to injuries it sustained.

The property was the subject of a loan agreement between KBC and the farm’s registered owner, Michael Anthony McGann. He fell into arrears on repayments and owed the bank some €431,000. KBC’s 2012 possession order for the property was not appealed. The last repayment on the loan to KBC was made by the borrower in February 2014, it was claimed.