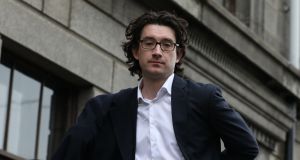 Articles which included Denis O’Brien among 22 men named as the 22 biggest borrowers from Irish banks in 2008 were not a “contrivance” to “blacken” him, the High Court has been told.

The articles published in the Sunday Business Post (SBP) on March 15th 2015 were based on a confidential Price WaterhouseCoopers (PwC) report about the exposure of Irish banks in 2008, former SBP editor Ian Kehoe said.

It was untrue to suggest Mr O’Brien was “shoehorned” into the articles or they were a “gratuitous, cynical and unwarranted slur” and a “contrivance” to blacken him, he said.

As then editor of the SBP, he was not in the business of “doctoring” reports and it would have undermined the credibility of the SBP to have picked 21 of the 22 names, he said.

A headline “The Gang of 22” was a reference back to the “gang of 22”, a group within Fianna Fail who tried in 1983 to oust Charles Haughey as leader of the party, he said. The phrase “the gang of 22” entered the political lexicon as a result of the 1983 events and it was used in a headline on one of the SBP articles as a “clever play” on the FF gang of 22.

There was nothing malicious about Mr O’Brien’s inclusion and the articles stated Mr O’Brien had met his interest payments and was a “great” borrower who had gone on to repay all his loans, he added.

Mr Kehoe was continuing his evidence on the ninth day of the action by Mr O’Brien against Post Publications Ltd, publisher of the SBP, alleging he was defamed in the articles.

The focus of the articles was the PwC report concerning the exposure of Ireland’s banks in 2008 which was given to the government in November 2008 but not made public.

Journalist Tom Lyons obtained it from a source in 2015 and shredded it shortly after publication of the articles to protect the source.

Mr O’Brien claims the articles, which ran over six pages, wrongly meant he was among a “gang” of 22 borrowers who “wrecked the country” and that they defamed him and injured his reputation.

The defendant denies the words complained of mean what Mr O’Brien says, denies defamation and malicious publication, and has also pleaded “fair and reasonable publication on a matter of public interest”.

Primarily because Mr Justice Bernard Barton had to deliver a lengthy judgment in camera on a separate case, the action did not resume on Tuesday until about 3pm when Mr Kehoe re-entered the witness box.

Michael McDowell SC, for the SBP, asked him about correspondence in March 2015 from Paul Meagher, solicitor for Mr O’Brien, complaining about the articles.

That correspondence included a five page letter of March 27th 2015 alleging defamation, breach of confidentiality and privacy and misuse of private information among other things.

It also referred to the use of the headline “gang of 22” and alleged a synopsis of Mr O’Brien in that article, which included a reference to his having repaid all his debts to Anglo and being one of Bank of Ireland and AIB’s best clients, was a “needle in a haystack” among all the articles.

Mr Kehoe rejected the claims concerning the meaning of the articles and said the “entire narrative of this court case” was about pulling different lines from different places and alleging meanings which he disputed.

The articles were not about Mr O’Brien but about the state of the Irish banking system in 2008 and the only article relating to Mr O’Brien was complimentary abut his capacity to pay his debts, he said.

Asked about an article headlined “People of influence, people of blame”, written by journalist and transparency campaigner Gavin Sheridan, Mr Kehoe said the focus of that was the banking inquiry and Mr Sheridan felt there were questions the inquiry needed to answer to get a fuller understanding of what had happened.

Mr Kehoe said he did not consider it an illegal act to publish the confidential PWC report and believed publication was in the public interest. He was part of the decision to shred the report to protect the source who had provided that. The concern was the report copy might contain “secret triggers” which would identify the source.