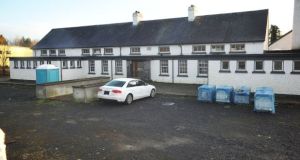 The abandoned national school in Ballivor, Co Meath. The Narconon Trust, which is linked to the Church of Scientology, to develop the building into a drug rehabilitation centre. Photograph: Seamus Farrelly

A High Court judge has overturned decisions by An Bord Pleanála that a proposed residential €9m drug rehabilitation centre in Co Meath, linked to the Church of Scientology, requires planning permission.

Narconon Trust sought a judicial review after the Board decided in November 2018 that a change of use from a permitted nursing home to a residential drug rehabilitation facility was not exempt development.

Planning permission was granted in 2014 for a nursing home at the site of the former old National School in Ballivor, Co Meath, but the nursing home was not built.

The site was acquired in 2016 by Narconon Trust, registered in Sussex, England, which is linked to the Church of Scientology and supports drug rehabilitation charities as part of its mission.

The trust was founded by Massimo Angius, a trustee and director of the Church of Scientology in England for more than 20 years. It has about 40 drug rehab facilities around the world and has spent some €9m to date on purchasing and constructing the Ballivor facility.

It bought the site after getting a declaration from Meath County Council in 2016 the proposed change of use from a nursing home to residential drug rehabilitation facility is exempt development.

The Council referred the matter to ABP which in November 2018 made the disputed decisions.

In its judicial review, the Trust, represented by Jarlath Fitzsimons SC, argued the Board was precluded from deciding the referrals submitted to it under section 5 of the Planning and Development Act 2000 because the Council had already determined, in September 2016, a section 5 referral asking the same question in respect of the same lands and where there had been no change in the situation or planning circumstances.

The Board, against which the case was brought, denied those claims. BCG and TMDC were notice parties.

In his judgment on Friday, Mr Justice Heslin upheld the Trust’s arguments.

He was satisfied both BCG and TMDC were aware in 2018 of the Council’s September 2016 decision but considered that was wrong and were effectively seeking a different answer.

He was further satisfied there was no evidence of any change in planning facts or circumstances between the 2016 decision and submission of the BCG and TMDC applications in 2018.

It is clear the Trust made its 2016 section 5 application so as to have the planning status of its then proposed development determined and to get an authoritative ruling, he said. The 2016 declaration could have been challenged in judicial review proceedings by the notice parties but no challenge was taken within the relevant time limits.

He was also satisfied all the relevant facts were available, in documents, to the board’s inspector in September 2018 and the board in November 2018 when it made its decisions.

Given the facts, and the provisions of section 50.2 of the 2000 Act concerning the procedure for judicial review, he was satisfied the Board could not lawfully decide the 2018 referrals under section 5 and acted in excess of its powers in doing so when each referral constituted an impermissible attempt to circumvent the mandatory procedure for questioning the validity of decisions by the Meath council.

The court could not permit a “collateral” attack by both notice parties on the Council’s 2016 declaration using their 2018 requests, he said.

To allow a challenge to the 2016 decision via questions submitted in 2018 and identical in substance to those provided in 2016 would “set at naught” the requirements of section 50.2, be offensive to the concept of legal certainty and result in an injustice. In the circumstances, he would quash the Board’s decisions of November 2018, the judge concluded.