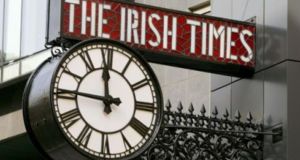 The Irish Times Ltd (TITL) had sought various injunctions, pending the outcome of a full hearing, arising from the planned launch of the new digital publication, to be sold as part of a subscription package with the Sunday Times.

The High Court has refused an application by The Irish Times for injunctions restraining the publishers of London Times using the words “The Times Irish Edition” in promoting a new digital Irish edition of the UK newspaper.

The Irish Times Ltd had sought various injunctions, pending the outcome of a full hearing, arising from the planned launch of the new digital publication, to be sold as part of a subscription package with the Sunday Times.

Among the injunctions sought were orders restraining Times Newspapers Ltd promoting the digital publication using the words “The Times Irish Edition” or any other title confusingly similar to The Irish Times.

In opposing the application, TNL, publisher of the Times, denied the use of the words “The Times Irish Edition” runs the risk of creating confusion with The Irish Times. It also argued that delay by The Irish Times in bringing its application disentitled it to the injunctions.

In his judgment on Monday, Mr Justice John Hedigan ruled the injunctions should be refused on grounds of delay in seeking them.

The background to the application was “unusual” as the Times has been sold in Ireland since 1785 and The Irish Times since 1859. Since the 1980s, an Irish edition of the Sunday Times had also been on sale in Ireland. The Irish Times and London Times have co-existed peacefully for some 150 years, he noted.

This case arose from the decision to publish an Irish edition of the London Times, the first national edition of the Times outside the UK, he said. The new publication would be in direct conflict with The Irish Times and might usher in a highly competitive relationship and inevitable confusion between the titles.

He was satisfied on the evidence the London Times decision to launch an Irish edition was “common knowledge” among journalists since September 2014.

A number of tweets exhibited by TNL, including tweets circulating through The Irish Times, showed those involved in Irish journalism were well aware of the defendant’s intentions.

Even without the exhibited tweets, he would find it difficult to believe the plaintiffs were unaware of the intended launch of this newspaper, the judge said. He was also satisfied the new publication could not be launched without identifying itself as an Irish edition and that it was also “highly improbable” the new publication would call itself the Times of London.

In light of the co-existence of both publications for so long, the judge said he could understand there may have been some confusion about what to do.

However, the evidence was the defendants had made elaborate, complex and costly preparation for the launch to which they had made a very substantial commitment.

Taking into account the long history of peaceful coexistence between the sides, the defendants had at least an arguable case of estoppel against the Irish Times on the basis of the long co-existence, he said.

Applying the relevant legal principles, he was satisfied The Irish Times Ltd had not moved with reasonable expedition and he would refuse the injunctions, the judge ruled.

Given his finding on the delay point, the judge added he did not have to address other issues including whether the plaintiff had made out an arguable case, whether damages would not be an adequate remedy or where the balance of convenience lay.

He adjourned a decision on liability for costs of the three-day application to Wednesday.