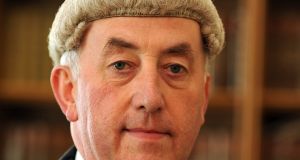 Mr Justice Peter Kelly said the risk of not doing the surgery, aimed at saving the man’s foot, severely deformed due to diabetes complications, “could be fatal”. Photograph: Aidan Crawley

A High Court judge has made orders permitting emergency surgery on an intellectually disabled man who is seriously ill.

The surgery may have to include amputation of a severely deformed foot which the man “venomously” opposes.

An orthopaedic surgeon described the man’s condition as life-threatening with a 100 per cent chance of septicaemia, gangrene and death within a year unless the surgery was performed.

On Wednesday, Mr Justice Peter Kelly granted an application by the HSE for orders permitting the surgery on an emergency basis.

He said the risk of not doing the surgery, aimed at saving the man’s foot, severely deformed due to diabetes complications, “could be fatal”.

The surgery was also worth doing if it would lead, even in the medium term, to avoidance of the amputation which the man was “very much against”.

Aged in his 50s and a ward of court, the man lives at home alone with care supports. His case came before the court via an urgent application by Patricia Hill BL, for the HSE, for orders permitting the surgery.

Solicitor Aileen Curry, representing Patricia Hickey, general solicitor for wards of court, supported the surgery. The court heard the man has had several hospital admissions and has been under orthopaedic care for more than a year. An orthopaedic surgeon, following a recent review of his condition, wanted to perform the surgery urgently as she considered, unless it was done, the man’s condition would shortly become life threatening.

Ms Hill said the surgery poses risks, including a 20 per cent risk of infection and gangrene. There was also a risk, during surgery, if the surgery was not successful, the surgeon might have to proceed with a below the knee amputation and the surgeon wanted orders permitting that if necessary.

Ms Curry, for Ms Hickey, previously appointed by the court as the committee to represent the interests of the man in wardship, said the man was made a ward of court in autumn 2017. He lived alone and, while he had received very good care from a service provider in his home, was difficult to deal with. A more structured nursing home placement had not worked out. The man was “venomously” opposed to amputation but the committee supported the surgery because there was a high risk to his life and this was an emergency situation, she said. If amputation was considered necessary during the surgery, the committee also felt it must support that. In his ruling, Mr Justice Kelly said the man is “grossly overweight” with a Body Mass Index over 50 and conditions including diabetes and hypertension.

He has a serious medical condition and, as a result of complications of diabetes, his foot was severely deformed and he is effectively walking on bone, leaving him vulnerable to infections. As a result of diabetes, he has no pain sensation and more damage was being done to tissues that he was unaware of.

He had experienced infections and sepsis over the past year and the doctor’s concern was these were life threatening. The evidence was surgeons would usually recommend below-the-knee amputation in such situations but the man opposed that. This proposed surgery was aimed at saving the foot and straightening it so he would be walking on the sole of the foot again but there were risks, including amputation might ultimately be necessary during surgery.

On the evidence, the surgery was in the man’s best interests, the judge ruled. The judge also noted the man’s home situation was “quite undesirable” and directed a post-surgery care plan be prepared.