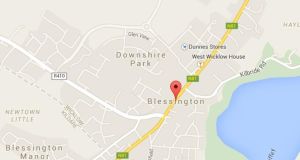 A locator map showing Tinode, Blessington, in Co Wicklow where a court has ordered the demolition of a wooden chalet. Image: Google maps

An order for demolition of the wooden chalet home of a young family in Blessington, Co Wicklow built in “gross” breach of planning laws has been granted by the High Court.

In an important judgment endorsing strict enforcement of such laws, president of the High Court Mr Justice Nicholas Kearns made the order in a judgment strongly disagreeing with a previous High Court ruling.

In this judgment from 2013 a judge refused to order the demolition of a different wooden chalet home near Lough Dan in Co Wicklow.

The order made on Friday permits demolition of the home at Tinode, Blessington, on the busy N81 road between Tallaght and Blessington, of Gary Kinsella, his partner and their young child, at a date time to be agreed between the sides.

If they cannot agree, the judge will fix a date for demolition when the case returns to him next week.

In his decision, Mr Justice Kearns said planning control is “an essential environmental necessity in a properly ordered society” without which there would be nothing to stop “a free for all development culture from running riot”.

There would be levels of “absurdity” if property rights of a person acting unlawfully were in every instance to be permitted trump those of a democratic society, he said.

An “extreme” example was a person might create overnight a structure outside Dublin’s GPO with sleeping and cooking facilities and then claim it was “inviolable” due to the constitutional protection afforded to the family home.

While the courts can take many considerations into account in enforcement applications, including personal circumstances and the nature of the unauthorised structure, the “bottom line” is Section 160 of the Planning and Development Act 2000 (which permits demolition of unauthorised structures) was intended by the Oireachtas to provide an “effective tool” in planning enforcement.

When a development is not built bona fide, the court’s discretion was necessarily limited.

Mr Justice Kearns said he had difficulties with the June 2013 decision of Mr Justice Gerard Hogan in the case of Wicklow County Council v Fortune, which the council argued rendered “ineffective” the enforcement procedures, including demolition, of Section 160 of the Planning and Development Act 2000.

His difficulties included that Mr Justice Hogan appeared to have reviewed the planning assessment of the Council, the statutory planning authority, when various legal decisions said such a review was not within the courts’ remit and the Oireachtas had enacted that decisions on the issue of permissions are made by statutory specialist bodies and not by the courts.

Mr Justice Hogan’s decision also went against case law holding that a person’s conduct is one of the most compelling factors to be taken into account when a court is exercising discretion.

The council expressed serious concern about the “far reaching consequences” of the Fortune decision where Mr Justice Hogan refused to order demolition of an unauthorised wooden chalet home built by Katie Fortune in a scenic area near Lough Dan.

Mr Justice Hogan refused demolition on grounds including protection of property rights and inviolability of a dwelling under Article 40.5 of the Constitution.

He found that while the chalet was not built bona fide, the council had failed to show the retention of the dwelling was manifestly at odds with important public policy objectives.

In his judgment, Mr Justice Kearns said the council believed the Fortune case created “carte blanche” for individuals to build family homes where and how they wanted with “perceived immunity” from demolition due to the constitutional protection of the home.

The council was also particularly concerned the Fortune decision was made on a Circuit Court appeal which cannot be further appealed, he said.

Without wishing to offend Mr Justice Hogan, “perhaps the outstanding constitutional legal expert of this generation”, Mr Justice Kearns said he believed a Circuit Court appeal, because it cannot be appealed further, is not an appropriate forum to lay down “novel legal principles” which may have far-reaching effect and consequences such as in the Fortune case.

It was also “beyond the court’s comprehension” how some “free-standing” application of Article 40.5 could be applied to reward the Kinsellas or Ms Fortune when both developments were not bona fide, particularly having regard to the “huge public and community interest in protecting the environment and the integrity and efficacy of planning law enforcement”.

The council raised its concerns about the implications of the Fortune decision in proceedings brought against siblings Gregory and Gillian Kinsella over the construction by Mr Kinsella of a wooden chalet dwelling without planning permission on lands bought by the siblings in 2003 which front onto the busy N81 road.

When a warning letter about that structure was issued by the council in September 2012, Mr Kinsella said he was unaware he needed permission because there was a structure on the site previously but said he would seek retention permission.

He failed to lodge the retention application within the eight week period stipulated.

When a December 2012 inspection showed works continuing on the chalet, an enforcement notice issued.

A further inspection in April 2013 found the chalet was occupied and the council told the Kinsellas in June 2013 it had initiated proceedings for removal of the unauthorised development.

They took no steps concerning compliance and the High Court proceedings were instituted in October 2013.

Three days before the High Court return date, an application for retention permission was made which was later refused.

On Friday Mr Justice Kearns said full enforcement of Section 160, which permits removal of unauthorised development, was appropriate and proportionate in this case where the development was “unauthorised and deliberate”.

Traffic hazards from the proximity of the chalet to the busy N81 road were identified as the reason for refusal of retention permission and there was no realistic prospect that hazard would abate in the short term, he said.

The council had argued the dwelling was only established because Mr Kinsella “stole a march” on the enforcement process.

He had built and completed the dwelling and occupied it without any planning permission and in full knowledge the Council regarded it as unauthorised and illegal.

Any protection for a dwelling given by the Constitution under Article 40.5 “may be modified by law in a proportionate way and may sometimes yield to competing rights and also to duties owed to the citizen”, the judge said.

The Planning Act modifies property rights and rights which might otherwise be enjoyed to establish dwellings in the interests of proper planning control by removing the right to establish or alter dwellings except in accordance with planning permission.

Effective planning control “depends on public compliance and acceptance of the rules” and having effective measures to ensure compliance, he added.