Decisions of public bodies must be clear enough for people to decide if there is legal basis to challenge them, court hears 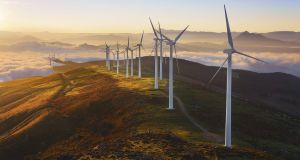 A woman has won a High Court order overturning a grant of permission for a development of four wind turbines near her home in Co Clare.

In a judgment strongly critical of absence of clarity and specificity in An Bord Pleanála’s grant of permission, Mr Justice Max Barrett said decisions of public bodies must be clear enough for people to decide if there is a legal basis to challenge them.

“Proper planning was never intended to be, nor can it be allowed to become, a perk reserved for the few who can afford expert lawyers, with something less than best being the lot of the many who cannot.”

Kathleen Connolly was “rightly insistent” there be full compliance with the law before a wind farm is planted by her homestead, he said. While the board had criticised her case as “opportunistic”, arguing it had “little or nothing to do with a bona fide concern for ecology”, there was “nothing opportunistic” in seeking to have a statutory body comply with legal requirements.

The board is required to comply with the law, it had come to court claiming it had done so but, “unfortunately for it”, it had not.

He ruled Ms Connolly was entitled to an order quashing the board’s 2014 grant of permission for four wind turbines, with hub height of up to 85m and rotor diameter of up to 82m, at Coor West, Shanvogh, Co Clare.

Clare County County in 2011 refused permission for the original planning application by McMahon Wind Acquisitions Ltd for six turbines on grounds including visual and noise impact, unsuitability to the location with consequent water pollution risks and lack of information about what threat was posed to the hen harrier, bats and to intended haulage routes.

On appeal, An Bord Pleanála asked the developer for specific information to address the deficiencies identified after which it granted permission in 2014.

Ms Connolly appealed to the High Court on grounds including the board failed to meet requirements of the planning acts in its assessment of, and decision on, the planning application.

Among her complaints, she alleged a notice circulated by the board, while indicating a Natura Impact Statement was required so an appropriate assessment may be undertaken by the board, gave no reason why it decided such an assessment was necessary.

In answering these and other complaints, it was not sufficient for the board to effectively say it had considered all the material put before it and then decided an appropriate assessment was necessary, Mr Justice Barrett said.

It is not enough for a public decision making body to issue a decision that refers in “a largely uninformative manner” to an “ocean of material” consulted or relied upon and leave an affected party thereafter to “fish in that ocean” for whatever they might catch of relevance within the “ever diminishing timeframe” for judicial review.

It was not sufficient to say “somewhere in an ocean of documentation is some stream of logic that An Bord Pleanála favours”.

In its reliance on “quite generic reasoning and a “rather contrary report relating to a different development”, it was difficult to find the board had complied with the legal requirement to properly evaluate the direct and indirect effects of the proposed development, he held.

The board must make precise and definitive findings and conclusion of a degree of specificity to enable a person to meaningfully assess the lawfulness of that decision and enable a court to undertake a comprehensive judicial review.

There was “no way” Ms Connolly could readily satisfy herself, from the text of the board’s decision, whether or not to bring a challenge and certainly not without going through pages of documents, trying to “decipher” what had been done and whether that was in accordance with law.