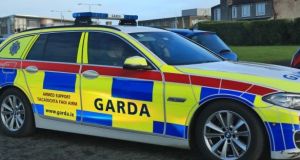 Garda Noel Callan had suffered from publicity due to media coverage of the case and it had caused a lot of distress for him, the court heard. File photograph: Collins

A garda left with a disfigured fingernail after a patrol car door slammed on the little finger of his left hand while he was restraining a drunk and violent man cannot pursue a compensation claim, the High Court has ruled.

The judge also awarded costs against the garda of the proceedings.

Garda Callan injured his finger while on duty in Swords, Co Dublin on August 26th, 2011. One of those being arrested for a public order offence lashed out with a kick which resulted in Garda Callan’s little finger getting caught in the patrol car door.

The garda was brought to hospital and the nail on his little finger removed and he had stitches to the nail bed.He was out of work for a week and on indoor duty for two weeks.

He disputed the Minister’s refusal to sanction a claim under the Garda Compensation Acts because the Minister considered, based on medical reports, the injury was minor.

In his judgment, Mr Justice Barrett said Garda Callan suffered an injury that ought never to have been visited upon him at a time when, in the discharge of his duty to protect the public, he was arresting individuals for public order offences.

“What he suffered in and after his injury ought not to be underestimated, getting one’s hand caught in a door, losing the relevant finger nail, getting stitches to the nail bed; these are experiences from which any rational being would shrink,” the judge said.

The judge noted a doctor on behalf of the Garda Síochána had noted “no residual functional impairment or cosmetic impairment and no long term sequelae of significance” in relation to the injury.

Those are precisely the kind of observations which might yield the “rational, reasonable and lawful conclusion” the injury is minor in character, he said.

However, the court’s task in this case was relatively limited and confined to whether the Minister in reaching the decision acted bona fide and in accordance with the law.

The judge said the good faith of the Minister was not challenged by Garda Callan and the court considered the Minister acted in a bona fide, factually sustainable and not unreasonable manner.

The decision was not legally flawed and there was no basis on which the court could grant any of the reliefs sought by Garda Callan.

Richard Kean SC, for Garda Callan, asked the judge to make no order for costs, meaning each side pay their own.

Garda Callan had suffered from publicity due to media coverage of the case and it had caused a lot of distress for him, he said.

Mr Justice Barrett said he was very sorry to hear Garda Callan had suffered distress but that was not a reason not to award costs against him.