Injunction to be sought over Chapelizod housing scheme 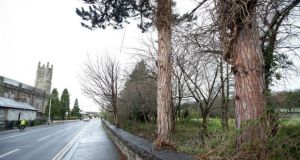 The site of Springvale allotments opposite the Church of the Nativity where Dublin City Council aims to ‘rapid build’ 71 social housing apartments. Photograph: Tom Honan

A High Court injunction is to be sought to halt works which have begun for a 71-apartment social housing scheme in Chapelizod village, Dublin.

Last December, a residents group got permission from the court on a one side only represented basis to bring a judicial review challenge over the development at the Springvale site, opposite the local Roman Catholic Church.

The action is against the Minister for Housing Planning and Local Government, the State, and Dublin City Council.

The council has a building company on the site where, over the last two months hoardings have been erected, ground cleared, earth moved and hard surfaces installed, among other works.

On Wednesday, John Kenny BL, for a company representing residents — Chapelizod Community for Democracy and Sustainability (CCDS) — said his clients got permission to bring the challenge in December and understood works would cease until the judicial review was determined.

This had not happened and it was now going to be necessary to bring injunction proceedings stopping the work, he said.

Mr Justice Charles Meenan, noting a stay on the works had not been sought at the time of the judicial review application, gave liberty to bring the injunction application next week.

The CCDS is asking the court to quash the October 7th 2019 decision of the council to approve the development.

It is claimed the council failed to provide reasons or the responses of its chief executive/city manager to issues raised during public participation on the plan. That, it is alleged, was in breach of the Planning and Development Act 2000.

The CCDS claims the 2001 regulations arising from the 2000 Act are outside the power of the Minister and that Section 179(1) of the 2000 Act is unconstitutional.

It also claims the council’s decision to approve the plan was a breach of the EU Habitats Directive and of the directive governing environmental impact assessments (EIAs).

Against the State and the Minister, it is also claimed there was a failure to adequately transpose the EIA directive.

The residents say the plan was approved without properly determining whether an appropriate assessment or EIA was needed.

The court was told in December that the Springvale site had for some time in the past been used as a dump and there was no consideration of leachate from toxic materials and its interaction with the nearby River Liffey.

The council was obliged to analyse and assess whether there was a proven link between overcapacity in the Ringsend treatment plant, which will treat effluent from the development, and deleterious effects on the Natura 2000 sites in Dublin Bay, it was claimed.

The residents also argue the council failed to address in an EIA significant roosting sites for bats, a protected species, on the land.