Information on Mick Wallace ‘only in Shatter’s mind’, court told

Comments not in breach of data protection laws as information not recorded, counsel claims 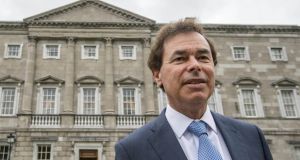 Alan Shatter’s disclosure of information about Mick Wallace on RTÉ’s Prime Time did not breach data protection laws because the information was “in his mind” only, the High Court has been told.

The information – that the Independent TD was allegedly cautioned by gardaí for using a mobile phone while driving – was provided to the former minister for justice during a conversation with then Garda commissioner Martin Callinan, Eileen Barrington SC said.

It was “critical” the information was never recorded on the Garda Pulse system and Mr Shatter has never seen an internal Garda email said to have contained the information or any other written note or record of it, she said.

It was “absurd” that information only in Mr Shatter’s mind had been found by the Data Protection Commissioner (DPC) to be personal data processed by Mr Shatter, she said.

Data protection provisions concern manual and automated data and whatever views one had about politicians, the data in their heads could not be said to be “automated”, she added.

The personal data finding was among several deficiencies and “fatal errors” in the decision of the DPC upholding Mr Wallace’s complaint about the disclosure by Mr Shatter during a Prime Time interview broadcast on May 16th, 2013, she argued.

The DPC decision was given on May 6th, 2014, the same day barrister Seán Guerin gave his report to then taoiseach Enda Kenny which addressed Mr Shatter’s handling of complaints made by Garda whistleblower Maurice McCabe, counsel noted. That was “a bad day” for Mr Shatter, who resigned as minster the following day.

Counsel was opening Mr Shatter’s appeal over the Circuit Civil Court’s dismissal of his challenge to the DPC’s decision his disclosure of the information was done in breach of his statutory duties under the Data Protection Act.

Mr Wallace complained to the DPC after the Prime Time interview and has taken separate civil proceedings against the Minister for Justice, and against Mr Shatter personally, over the matter, which have yet to be heard.

In his High Court proceedings, Mr Shatter claims the DPC failed to set out the basis for his conclusion the information was personal data and had prejudged that issue and acted in breach of fair procedures.

He claims, on the same day Mr Wallace lodged a complaint over Mr Shatter’s comments, the commissioner made a statement to RTÉ News to the effect personal data had been disclosed during the Prime Time debate.

He disputes arguments by the commissioner, because Mr Shatter was minster for justice when he made the disclosure, he does not have the necessary legal standing to appeal the commissioner’s decision.

Ms Barrington said the DPC decision relates to criticisms of Mr Shatter’s personal actions in going on Prime Time and making the disclosure.

The Court of Appeal, in upholding Mr Shatter’s separate challenge to the Guerin report, found he had rights as a citizen to vindicate his constitutional right to his good name and fair procedures.

Counsel argued the DPC had wrongly applied the data protection laws in this case and erred in finding Mr Shatter a “joint controller” of personal data.

Mr Shatter did not control the content and use of information passed orally to him by the Garda commissioner, she submitted.

The DPC denies the claims and also contends Mr Shatter had no legal standing to bring the appeal, as Mr Wallace’s complaint to the commissioner was made against the Minister for Justice.

Mr Shatter acted at all times in his capacity as minister and the only person who could take such an appeal was the current Minister, it is pleaded.