Ward of court has dementia and various complex psychiatric conditions 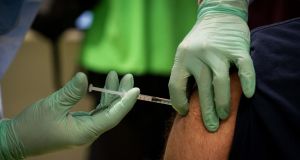 A man receives a dose of the Covid-19 vaccine in Berlin, Germany. Photograph: Kay Nietfeld/DPA/Bloomberg

A High Court judge has said she is satisfied the HSE correctly decided not to seek court orders to have the Covid-19 vaccine administered to a ward of court against her wishes.

The woman, aged in her seventies with dementia and various complex psychiatric conditions, is in a nursing home where about 98 per cent of the residents have received the vaccine.

Her treating clinician, while agreeing the woman lacks capacity to make appropriate decisions about her medical treatment, considered that forcibly administering the vaccine would be counterproductive for reasons including the objectives of her overall care plan involved building trust between her and staff.

Maireád McKenna BL, for the HSE, told Ms Justice Niamh Hyland on Wednesday it is not, in the circumstances of this case, seeking orders for coercive vaccination but efforts will continue to try and persuade her to be vaccinated and the situation will be kept under review.

If the woman later agrees to be vaccinated, it will be administered to her and the vaccine will continue to be rolled out to any new residents of the nursing home, counsel said. One other resident, who is not a ward of court, has also refused the vaccine.

The ward’s case was before the judge on Wednesday in relation to her continued placement in the nursing home and concerning the vaccination issue.

She was placed in the nursing home last autumn after a lengthy stay in hospital. She has no family here and the general solicitor for wards of court was previously appointed as the committee to represent her interests in wardship.

On Wednesday, Paul Brady BL, for the committee, told Ms Justice Hyland the pandemic had raised difficulties concerning visiting the woman in the nursing home but the feedback from ongoing contact between the committee and those involved in her care was that she has settled well and is receiving good care.

After the woman said she did not wish to receive the Covid-19 vaccine, a medical report was requested which stated it was in her best interests to receiveit but there was an issue as to how that was to be achieved in light of her refusal.

Mr Brady outlined considerable contacts between the committee and the HSE in that regard.

The HSE has provided a comprehensive care plan, which the committee supports, which did not favour seeking coercive administration of the vaccine but favoured continuing an approach of positive engagement with the woman concerning her treatment.

The plan’s emphasis was on trying to explain the rationale for interventions and encouraging the woman to engage with those and she has responded to a degree, the court heard. It was considered seeking coercive orders for vaccination would be counterproductive and could jeopardise the overall care plan.

Having heard the sides, Ms Justice Hyland said she was satisfied the HSE’s decision not to seek an order permitting coercive vaccination was correct. The woman has refused the vaccine and, although she lacks capacity, it was necessary to evaluate the risks and benefits concerning whether she should be coercively vaccinated or not, she said.

In that regard, factors taken into account included her individual situation; her existing medical conditions; the fact two injections would be involved; that the vast majority of residents had been vaccinated and she is considered at low risk of contracting the virus; and that coercive vaccination would greatly interfere with trust between her and staff, the judge said.

She was also satisfied that issues concerning communications with the nursing home have been resolved, the woman is getting excellent care there and all the parties are committed to her welfare.

Making orders continuing the woman’s placement, the judge said there was a detention aspect to those because, while her risk of absconding seems lower than previously, there was still a small risk.