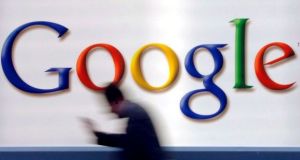 The Dublin-based Garda, who cannot be identified for legal reasons, says he features in a Youtube video, more than three minutes long, which was recorded at a public order incident in 2016 when he and other members effected an arrest. File photograph: EPA

Internet giant Google has agreed to provide a Garda with information about a person who posted a Youtube video which the officer alleges contains commentary that is false, malicious and defamatory of him.

The Dublin-based Garda, who cannot be identified for legal reasons, says he features in a Youtube video, more than three minutes long, which was recorded at a public order incident in 2016 when he and other members effected an arrest.

He claims the video commentary wrongly accuses him of kicking a minor in the head.

The audio on the clip does not match and does not reflect the images displayed in the video, he claims.

His solicitors had tried to make contact with the poster of the video clip on Youtube, calling for it to be taken down but were unable to determine the identity or address of the poster.

The Garda also asked Google, which owns Youtube, to take down the video.

When that was not done, the Garda initiated High Court proceedings.

Last year, he got a temporary order directing Google to take the video down.

That order was subsequently replaced by an undertaking in the same terms given by Google.

Ken Fogarty SC and John Morrissey BL, for the Garda, sought various other orders, including a permanent injunction requiring Google LLC to remove the video from Youtube.

He also sought orders directing Google to deliver up the identity of the person who posted the video and all other relevant contact information and details within its power and control.

The case, including a number of pretrial motions, came before Mr Justice Senan Allen at the High Court.

Following talks on Thursday, Google, represented by Michael Howard SC, consented to an order known as a Norwich Pharmacal order under which it will disclose to the Garda what information it has concerning the identity of the person who posted the allegedly defamatory video.

The parties also agreed the injunction proceedings would be discontinued and struck out against Google but will continue against the person who posted the video.

They also agreed the court could make no order concerning costs, meaning both sides pay their own.

The court previously heard the commentary on the video wrongly accuses the Garda of having “assaulted that young fella”, “kickin the head off him” and “boot’n him.”

The Garda claims those statements are unfounded and without substance and the video has impacted on him as an individual and a member of An Garda Síochána.

He was informed of the video by several of his colleagues after it was posted, the court heard. It received almost 40,000 views and the website had dozens of comments.