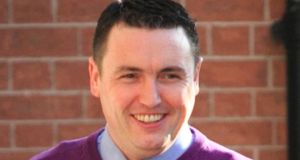 Garda Keith Harrison at the Disclosures Tribunal in 2017. He brought proceedings that centred on an alleged prior professional interaction between the tribunal chair Mr Justice Peter Charleton and a witness Chief Supt Terry McGinn. File photograph: Gareth Chaney Collins

The High Court has dismissed Garda Keith Harrison’s bid to have findings made against him by the Disclosures Tribunal investigating claims made by Garda whistleblowers quashed.

The Donegal-based Garda, who was strongly criticised in the tribunal’s interim reports brought proceedings that centred on an alleged prior professional interaction between the tribunal chair Mr Justice Peter Charleton and witness Chief Supt Terry McGinn.

The alleged prior engagement, which led to a claim of objective bias, related to when Chief Supt McGinn was the Garda liaison to the Morris tribunal which considered allegations about gardaí in Donegal, in 2002-2005 when Mr Justice Charleton was that tribunal’s senior counsel.

In her judgment on Friday, Ms Justice Aileen Donnelly said she was satisfied to dismiss the action on the basis that “no reasonable person could have a reasonable apprehension of bias based on the overlapping working period” when Mr Charleton and the Chief Supt McGinn worked at the Morris tribunal.

The judge noted that the claim being made was one of objective bias only and that there was no suggestion made by Garda Harrison’s lawyers that Mr Justice Charleton was in any way biased in the findings he made in the interim reports.

Garda Harrison had sought an order quashing findings relating to him made in the tribunal’s second and third interim reports.

He claimed the tribunal rejected allegations made by him and his partner, Marissa Simms, and had exonerated others they had made complaints about. Their claims included that Ms Simms was compelled by gardaí to make a statement against Garda Harrison which led to a Tusla referral.

Garda Harrison also alleged he was the victim of a five-year intimidation campaign after arresting a fellow officer for drink-driving in 2009.

In an interim report, Mr Justice Charleton said all the allegations made by Garda Harrison and Ms Simms that were examined by the tribunal were “entirely without any validity”.

Mr Justice Charleton praised the conduct of Chief Supt McGinn and her management of the Donegal division and was a key witness in relation to matters contained in a protected disclosure made by Garda Harrison.

Garda Harrison brought the proceedings after becoming aware of newspaper reports which reported a prior involvement between the judge and the chief superintendent. The articles quoted criticism of a reconstruction from the Morris tribunal, broadcast on RTÉ radio.

The articles quoted Mr Justice Charleton as saying that “all those who had worked with Supt McGinn had great respect for the assistance she had given the Morris tribunal and it was unfair to her that anyone might think she just was not interested in the truth”.

It was claimed that the articles and transcripts of the Morris tribunal showed that the judge knew the chief superintendent and had worked with her and was in contact with her.

Lawyers for the State argued Garda Harrison’s action should be dismissed and that the proceedings were fundamentally misconceived.

In her judgment, Ms Justice Donnelly said that a comment made by Mr Justice Charleton many years ago when acting in a different tribunal about Chief Supt McGinn doing her best to assist that tribunal had been “elevated” by Garda Harrison “as a ground for claiming objective bias”.

Based on the evidence before the court the judge said that Garda Harrison’s claim “does not bear rational scrutiny”.

The judge in her decision said the State’s evidence was that Chief Supt McGinn’s role as liaison was independent of the Morris tribunal and Mr Justice Charleton had no recollection of the comments he had made to the tribunal about the broadcast.

The judge said there was a minimal professional involvement between Mr Justice Charleton and Chief Supt McGinn. At the Morris tribunal, they had worked in different offices on different floors of the building where the hearing took place.

She said no reasonable person could have a reasonable apprehension that Garda Harrison “did not have a fair trial”.

Garda Harrison had also failed to demonstrate that Chief Supt McGinn had acted improperly in any way.

The case will be mentioned before the judge when all outstanding issues including who will pay costs will be considered, in October.