Freddie Thompson case over conditions at Portlaoise is adjourned 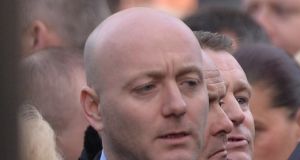 Convicted killer Frederick ‘Freddie’ Thompson’s High Court challenge over the conditions of his detention at Portlaoise Prison was adjourned at the last minute following an application by his lawyers.

Thompson was present in the Four Courts, amid tight security, on Wednesday when his action was due to be heard by Mr Justice Richard Humphreys.

However, Thompson’s counsel Padraig Dwyer SC, appearing with Keith Spencer BL, sought to have the case put back so they could consider submissions made by the State respondents in the case which were only received 24 hours earlier.

John Gallagher, Bl for the State, opposed the application for the adjournment.

Counsel argued that the parties were present in court, that Thompson’s lawyers had requested an early hearing and that the case should proceed.

There were no surprises and “nothing revelatory” in the State side’s submissions which include that Thompson’s current prison regime derives from “security concerns.”

Mr Justice Humphreys agreed that the best course of action was to adjourn the matter so that the submissions and any other matters can be fully considered, to a date later this month.

The judge also welcomed that the Prison Governor had said in a report that Thompson’s behaviour in the maximum security prison “was going in the right direction,” and that he hoped that continued.

Thompson (39), from Dublin’s south inner city, was jailed for life following his conviction at the Special Criminal Court last year for the murder of David Douglas in 2016.

He has been detained since March 2018 in Wing A4 of Portlaoise Prison, which is known as the punishment block.

He claimed that in breach of his human rights he is only allowed contact with two other prisoners, and spends most of his time effectively on “lock-up” in his cell.

He also claimed that he is being denied regular exercise, fresh air and appropriate education.

Thompson has brought judicial review proceedings against the Governor of Portlaoise Prison, the Irish Prison Service and the Minister for Justice aimed at ending his detention away from the mainstream prison population.

He also seeks better access to the prison’s facilities.

The court previously heard that Thompson claims his situation is unbearable and his mental health has been affected, and he is suffering from depression.

He claims that prior to his move to Portlaoise Prison he had always been housed within the general prison population. He also claims that he is being treated differently to other prisoners serving life sentences.

The Governor and the Irish Prison Service denied that Thompson prison regime is oppressive, and the regime meets all the statutory requirements.

The State says that since the action was launched Thompson now has access to four prisoners and has started at the prison’s school when the new term commenced in September.

They also say Thompson has been provided with access to facilities including the gym, recreation, open-air exercise and other services.

They also say claim that Thompson cannot mix with certain other prisoners due to security issues.

In a sworn statement grounding his action, Thompson said that he had been informally told that his move to Portlaoise was due to a perceived feud with another prisoner Brian Rattigan.

He said that following his incarceration and before his transfer to Portlaoise, he met with Rattigan and says that there is no issue between them.