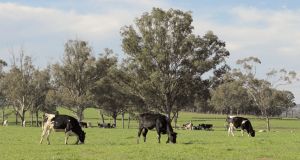 It was claimed that cattle were seen on the lands on certain days and that agents of the receiver were told to leave the property by a person purporting to be an employee of Mr Morrin. File photograph: Getty Images

A farmer has agreed to comply with High Court orders to vacate 50 acres owned by him over which a receiver has been appointed.

Tom Morrin told the court he will surrender vacant possession of the lands at Caragh, Naas, to the receiver and remove all machinery and livestock from the lands. He also agreed to cease interfering with agents of the receiver, Tom Kavanagh of Deloitte Ireland, in carrying out their duties in respect of the property.

Mr Morrin appeared before Ms Justice Leonie Reynolds after she ruled last week she was “satisfied beyond reasonable doubt” he had breached orders made by the High Court in July 2017.

In her judgment last Friday, she also dismissed applications by Mr Morrin of Poplar Square, Naas, Co Kildare, to have the receiver’s case thrown out on grounds it was frivolous, vexatious and an abuse of process. She also refused Mr Morrin’s application for orders preventing Mr Kavanagh and his agents from trespassing on his property.

On Tuesday, the judge was told Mr Morrin had agreed to orders, including to remove all machinery and livestock from the lands and not to interfere with the receivership. He also undertook not to appeal last week’s decision and to withdraw his appeal against the July 2017 orders. It was also agreed that a stay is to be placed on those orders until February. Mr Kavanagh was appointed as receiver over the lands in 2013 by Bank of Scotland Ireland arising out of a mortgage agreement allegedly entered into between it and Mr Morrin in 2006.

The loan was subsequently acquired by a financial fund, Pentire DAC. The receiver later brought proceedings against Mr Morrin for alleged ongoing contempt of the 2017 orders. Mr Kavanagh, represented by Stephen Byrne, claimed the defendant had flouted the order and remained in occupation of the property and continued to farm the lands.

It was also claimed security firm personnel engaged by the receiver had encountered difficulties on several occasions. It was that cattle were seen on the lands on certain days and that agents of the receiver were told to leave the property by a person purporting to be an employee of Mr Morrin. The matter will return before the court in February.