‘I want my mam back,’ young daughter said when asked what she wished for 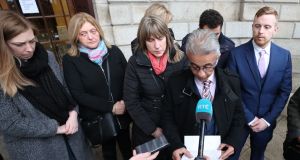 Peter Perie, father of the late Natasha Perie, reading a statement outside the Four Courts on Wednesday after a High Court action. Photograph: Collins Courts

Peter Perie spent a nightmare Christmas week in the Four Courts five years ago waiting for a decision to let him give his daughter Natasha, then 15 weeks pregnant and brain dead, “a dignified funeral and burial”.

Against the family’s wishes, Natasha (26) was on life support for almost four weeks due to doctors’ concerns about the implications of the Eighth Amendment for her unborn child.

On a very wet and grey St Stephen’s Day in 2014, three High Court judges ruled the only prospect for her unborn child was “distress and death” and the life support should end.

Natasha, due to the extent of her physical deterioration, was then buried in a closed coffin.

Peter, his son Daniel and other family members were back in court on Wednesday to hear an apology from Mullingar regional hospital and the HSE over failings in the care of Natasha, who suffered a ruptured brain cyst at the hospital and was pronounced brain dead on December 3rd, 2014.

Mr Justice Kevin Cross approved various nervous shock payments, including €150,000 for Natasha’s daughter who, aged just six in 2014, had been horrified when she saw her mother, swollen and almost unrecognisable, on a ventilator.

The child’s life was turned upside down by the death of her mother. She had been living in her grandfather Peter’s home with her mother and half brother but moved to live with her father.

A psychiatrist described her as a “sad child” who, when asked what would she wish for if she had three wishes, said: “I want my mam back.”

A nervous shock action was not taken for Natasha’s son as he was aged just four at the time of her death. He too has undergone a major change in circumstances and is also living with his father.

A mediation will take place in January to decide the main part of the family’s damages action, the damages to be paid arising from the death of Natasha, including for the loss of a mother’s care of her two children. Liability was admitted by the HSE earlier this year over her death.

Peter’s own mother died at 26 when giving birth to his younger brother and his late wife Helen died when Natasha was 16.

While yesterday’s hearing and apology has brought some closure for the family and will allow them “to finally grieve for Natasha”, “the pain, heartbreak and distress will never go away”, he said. “Natasha is gone forever.”

He is facing into a difficult few months as the January mediation has yet to take place and he is experiencing his own serious health issues.

After the hearing, he told The Irish Times that he went for a coffee in Dublin city centre. “Walking around here, it looks lovely, all the Christmas lights are up. But I feel nothing. I don’t celebrate Christmas – it’s too sad.”