Family dispute arises over sale of Kilkenny mansion for €17.5m 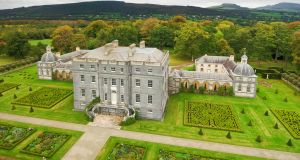 Castletown Cox. The Magan family has spent many millions on its meticulous restoration and refurbishment

A family dispute has arisen over the sale of Castletown Cox, one of Ireland’s finest Palladian mansions, which was placed for sale this week seeking offers above €17.5 million.

A beneficiary of a family trust which owns Castletown Cox is objecting to the sale of the south Kilkenny estate on 513 acres by the current trustee of the estate, DW Trustees.

On Monday, Edward Magan, a beneficiary of Eaglehill Trust, sought via a court hearing in Jersey to stop the marketing of the property for sale, but was refused.

The court ordered that DW Trustees could proceed with facilitating the marketing of and access to Castletown. Estate agent Knight Frank was then instructed to proceed with the sale.

The beneficiaries of Eaglehill Trust are Edward and Henrietta Magan, children of Lord George Magan, a retired banker who purchased the estate in 1999. DW Trustees administers the trust.

The Eaglehill Trust is governed by Bermuda law, and it is understood proceedings have been put in train there to remove DW Trustees as trustees of Eaglehill.

Details of the dispute emerged in Dublin late on Wednesday evening when representatives for Eaglehill sought to stop the publication of an article in The Irish Times about the sale of Castletown Cox.

Presiding over the hearing at a late sitting of the High Court, Mr Justice Paul Gilligan concluded that the row centred on “an interfamily dispute in relation to a trust fund where the property asset of the fund is the most valuable asset and has been placed on the market by the current trustee”.

He added that it was clear the trustee was taking a different view to the beneficiary that the property could be sold. Mr Justice Gilligan refused to grant an injunction. Consequently The Irish Times published the article.

Ivor Fitzpatrick & Company, Solicitors, issued a statement from its client Edward Magan. The statement noted that the High Court had ordered short service of proceedings for an injunction to Mr Magan to prevent the trustees taking any steps to promote or market the sale of Castletown Cox and its demesne. The statement added that related proceedings were also issued by Mr Magan and his father in Bermuda. The family, the statement said, “will not be making any further comment at this time”.

The Eaglehill Trust assets are valued at between €45million and €50million, with Castletown Cox representing the significant property portion of those assets. Representatives for Edward Magan argued in the High Court that publicity in relation to the sale of Castletown could lead to a “fire sale” of the trust assets.

DW Trustees told The Irish Times it is acting “in the best interests of the beneficiaries, but Edward Magan does not agree. The trustee is considering how to respond.”

The contents of the Kilkenny property include probably the finest – and rarely seen – private collection of ecclesiastical art in the State. In addition there is a significant quantity of valuable antique furniture, sculptures and garden statuary which could rival that of the estate itself. The contents of Castletown are held in another trust by different trustees.

The Magan family spent many millions on the meticulous restoration and refurbishment of Castletown Cox, making it probably the finest privately-owned property in the State.

A spokesman for Knight Frank said that its instructions remain to market the property for sale.