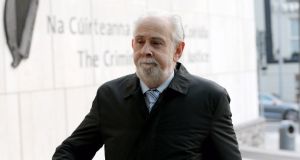 John Downey (66) from Donegal arrives at the High Court in Dublin on Friday for an extradition hearing over his alleged involvement in the murder of two Ulster Defence Regiment soldiers over 40 years ago. Photograph: Collins Courts

A hearing into the proposed extradition of a man wanted for the murder of two Ulster Defence Regiment soldiers in Enniskillen in 1972 has been adjourned by the High Court in Dublin.

Northern Irish authorities are seeking the surrender of John Downey (66) to face prosecution for the murder of two British army infantrymen as well as aiding and abetting the causing of an explosion on August 25th, 1972.

Lance Cpl Alfred Johnston and Pte James Eames were killed when a device exploded in a vehicle they were checking on the Irvinestown Road, Cherrymount, in Enniskillen.

Mr Downey was arrested earlier this month at his home address in Ards, Creeslough, Co Donegal, on foot of a European arrest warrant. He told detectives he believed “it was the DUP and not the DPP” who decided to prosecute him.

A hearing into Mr Downey’s proposed extradition was due to take place in the High Court in Dublin on Friday.

However, Ms Justice Aileen Donnelly adjourned the matter, on foot of an application by Mr Downey’s lawyers.

She said they were seeking information that was before the Central Criminal Court in London when it was decided that a prosecution for London’s Hyde Park bombing should not continue against Mr Downey.

Ms Justice Donnelly said the material had been disclosed to Mr Downey’s solicitor in London, Gareth Pierce. It referred to the 1972 events as well as the 1982 Hyde Park bombing.

She fixed January 28th next as the date for hearing. Mr Downey was remanded on bail to appear before the court on that date.

Mr Downey’s trial in relation to the London Hyde Park bombing – in which four soldiers and seven horses were killed – collapsed in 2014 over a letter sent to him and other alleged republican paramilitaries.