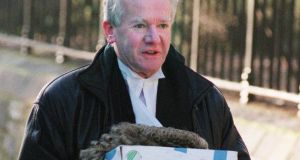 Retired Central Criminal Court judge Barry White wants to resume practise as a barrister ‘due to economic necessity’ but is being prevented from doing so by an unconstitutional Bar Council rule, it has been claimed at the High Court. File photograph: Bryan O’Brien/The Irish Times.

Retired Central Criminal Court judge Barry White has been asked to disclose details of his financial affairs as part of his legal challenge seeking to allow him to return to work as a barrister.

The action by the 71-year-old is over a Bar Council rule which prevents him practising in a court equal to or lower than the one he presided over, in his case all courts below the Court of Appeal and the Supreme Court.

Mr White claims he must return to practice as a barrister due to financial necessity and has said his pension entitlements were insufficient to meet the needs of his family.

His solicitor James McGuill on Tuesday asked the High Court to fix a date for hearing the case.

However, barrister Douglas Clarke, for the Bar Council, said there were a significant range of claims being made and there was the potential need for a discovery application.

He said the Bar Council’s solicitor had written to the former judge’s solicitor requesting information on his financial position in the five years up to his retirement.

Mr Clarke said the information was sought on the basis of statements made in Mr White’s grounding affidavit in which he said his pension entitlements were insufficient to meet the needs of himself and his family.

Mr Clarke said they had written on December 9th requesting information of assets and liabilities of Mr White and his spouse.

Mr White had previously indicated he would be in a position to disclose the information but the Bar Council said it had not yet received a reply to the December letter, he said.

He said there was the “potential necessity for an application for discovery”. He requested a four-week adjournment.

Mr Justice Max Barrett said it seemed sensible to adjourn the case for four weeks and said he would endeavour to make space for a hearing at a later date.

The court was also told Mr White would not be pursuing the competition aspect of the case and would be basing his claims on Constitutional grounds.

The court previously heard Mr White is challenging the Bar Council based on an 85-year-old Supreme Court decision which prevents retired judges resuming practice in a court equal to or less than the court of which they were a judge.

It is argued this ruling breaches Mr White’s Constitutional right to work and earn a living.

Mr White has four children , all of whom are in full-time education. He argues the Bar Council has no jurisdiction to impose such conditions on judges returning to practice.