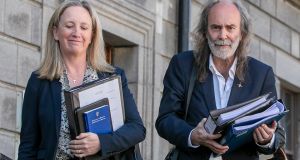 The State has told the High Court that a challenge by John Waters and Gemma O’Doherty to the constitutionality of emergency laws introduced due to the Covid-19 pandemic is “doomed to failure”.

The challenge was also described by lawyers representing the Houses of the Oireachtas as “a full-frontal attack” on the separation of powers between the executive and judiciary as provided for in the Constitution.

Mr Justice Charles Meenan, having heard final arguments on Wednesday on the applicants’ bid for leave to bring the judicial review challenge, reserved his decision.

He did not give a date for judgment but said the matter would be given “complete priority” by him and his judgment will be delivered electronically.

In their judicial review proceedings against the State and the Minister for Health, the applicants want to have various pieces of recently enacted legislation, which they say are unconstitutional and flawed, quashed by the High Court and declared unconstitutional.

The State, and lawyers acting for the Dáil, Seanad and the Ceann Comhairle, who are notice parties, opposed leave.

In submissions, Patrick McCann SC, with Gerard Meehan BL, for the State, said the application was “doomed” on several grounds.

This action was procedurally flawed and should have been brought by way of plenary hearing, which would involve hearing oral evidence before a court, and not by way of judicial review, counsel said.

He said judicial review was used to ensure lower courts and public administrative bodies have lawfully carried out their functions and was not a way to challenge a decision of the legislature or the Oireachtas.

There was failure to put expert evidence before the court supporting this challenge and the applicants lacked legal standing to bring the case as they had not set out how the regulations challenged personally affected them, he further submitted.

Francis Kieran BL, for the notice parties, said the challenge was “a full-frontal attack” on the separation of powers as provided for in the Constitution.

Counsel said the courts should not interfere with decisions made by the Houses in relation to the laws brought about by Covid-19 and leave should not be granted as the matters raised cannot be decided on by a court of law.

Contrary to what the applicants argued, the caretaker government was entitled to bring forward the laws which were unanimously passed by agreement of the parties and technical groups of the incoming Dáil, he said.

The Dáil was “perfectly entitled”, due to Covid-19, to have a reduced number of 40 TDs attend and vote on the laws, the number of TDs attending was reduced by agreement and it exceeded the required quorum of 20, counsel added.

While the Dáil is dissolved on the calling of an election, the Seanad remains in place until the day before a new one is elected and it is entitled to vote on legislation that comes before it, he submitted.

In their submissions, the applicants raised issues about the constitutional legitimacy of how the new laws were proposed by a caretaker government and passed by the legislature, in particular by an outgoing Seanad.

They disputed any procedural deficiency and also said they have legal standing to bring the case as citizens affected by the Covid-19 regulations.

Mr Waters argued the laws were so “draconian” they amounted to an exceptional circumstance which would allow the court to interfere with a decision of the legislature.

Having considered all the options, the applicants believed the best way to bring such an important action was by way of judicial review, he said.

Ms O’Doherty said the action was being brought “on behalf of the people of Ireland”.

The current situation arising from the emergency laws was akin to living under “martial law” and the actions of the Government were “like a coup”, she said.

When the judge asked her to cease making “speeches” which, he said, were not assisting the court in the decision it had to make, she denied making speeches and said she had a right to be heard on what was a very important issue.

The applicants say the laws, and the manner in which they were enacted, are repugnant to several articles of the Constitution including concerning the rights to travel, bodily integrity and family rights and amount to a “suspension” of constitutional rights.