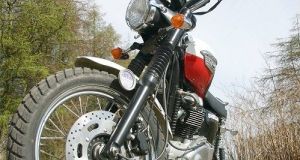 The couple have sued the MIBI, the body which compensates victims of uninsured driving. File photograph: iStock

A man who suffered catastrophic injuries when an uninsured scrambler motorbike hit him and his wife while they were sunbathing in a Dublin park is suing the Motor Insurers Bureau of Ireland (MIBI).

Ilabek Avetian (40) was in Darndale Park, Coolock, on June 9th, 2018, with his wife, Anzhela Kotsinian, when the bike landed on them.

Ms Kotsinian, who came from Lithunia to Ireland with her husband, was also injured but not as seriously as him.

They have sued the MIBI, the body which compensates victims of uninsured and untraced driving.

The High Court heard on Monday efforts are being made to trace the rider of the motorbike involved in the incident. The couple’s lawyers are to bring an application seeking the Garda Commissioner to reveal what information gardaí have on the rider.

The court heard the issue is complicated by the fact the individual is a minor and the law prevents a child from being identified.

That application was adjourned on consent between the couple’s lawyer and counsel for the Commissioner.

Separately, the couple sought permission from the court to join Dublin City Council, the owners of Darndale Park, as a third party in the case.

Laurence Masterson BL, for the couple, told Mr Justice Mark Heslin the MIBI are saying the council may have some liability.

It is alleged the council failed to control or supervise the park, or ensure it was patrolled by gardaí. It is also claimed the layout of the park was such that it was possible for an incident like this to take place, counsel said.

Mr Masterson said the council may argue there was little it could do if youths are going to drive motorbikes around the park but, having been called upon to do so by the MIBI, it was felt necessary to join it to the case.

Mr Justice Heslin said it was appropriate to join the council so that all matters may be effectively adjudicated on. The application was made on a one-side only represented basis.