Council to press ahead with Sandymount cycleway despite legal challenge 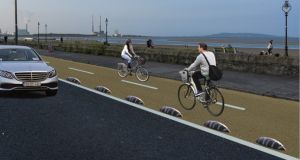 Dublin City Council said it intends to press ahead with work on the Strand Road cycleway in Sandymount, despite a legal challenge and a submission to An Bord Pleanála to stop it.

Traffic on Strand Road is due to be reduced to one way from March 1st to facilitate the opening of a new two-way cycle route later in the month, for a six month trial.

Independent councillor Mannix Flynn and Sandymount resident Peter Carvill on Monday secured High Court permission to take judicial review proceedings against the council plans to restrict traffic as far as the Merrion Gates to a single outbound lane with the other lane repurposed as a two-way cycle track.

Last Friday Mr Flynn applied to An Bord Pleanála for a declaration that the city council requires planning permission for the cycle path.

In their judicial review proceedings Mr Carvill, of the Serpentine Avenue, Tritonville and Claremont Roads group, and Mr Flynn are seeking declarations that the council’s plans are “unlawful” and in breach of European Union environmental directives.

They also asked the court to halt the implementation of the path until the judicial review has been determined.

Mr Justice Charles Meenan on Monday said he would only hear an application to put a stay on the work providing the council was given 72 hours notification of the application.

He said, however, he satisfied there were substantial grounds to bring judicial review proceedings following Mr Steen’s ex parte (one-side only represented) application.

The judicial review proceedings are due back in court in April.

In response to queries from The Irish Times on Monday the council said: “Dublin City Council intend to continue the required work to implement the trial of the Strand Road cycle track.”

This will result in the one-way system coming into force next Monday.

The application to An Bord Pleanála maintains that the two-way cycle track would be less Covid-compliant than the existing system where cyclists travel on the opposite side of the road to each other as part of general traffic.

The two-way track would mean cyclists were only one metre apart, the submission, made by Farry Town Planning Ltd on behalf of Mr Flynn states. “This would in our opinion facilitate the transmission of air-borne droplets to a greater degree than exists under the present layout,” it said.

“We believe that this proposal would increase transmission rates.”

The submission also noted that the cyclists in computer generated image of the track “are not wearing a face covering of any description”.

While the council maintains the cycle path is being implemented as a Covid-19 mobility measure, Mr Flynn’s submission states “it is our opinion that the proposed development, although presented as a response to Covid-19, actually forms part of a wider network”. It also references “dubious links between this project and the Covid-19 pandemic”.

The submission claims the environmental implications of the removal of the traffic lane had not been adequately assessed and it says it does not accept the council intends to project to be a temporary measure.

“In the absence of concrete and reliable proposals which would ensure that the project would crease after the initial test period, it would be safe to assume that this arrangement will become permanent.”

The council has maintained the cycle path is exempt from requiring planning permission. The project was in line with Government advice to implement walking and cycling schemes during the Covid-19 pandemic, it said.

The council had engaged independent consultants who confirmed there was no requirement for environmental assessments which could trigger an application to An Bord Pleanála, it said.