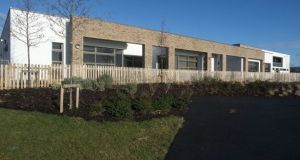 The Christian Brothers had proposed to sell seven acres of fields, used by Clonkeen College in Deansgrange for sports, for a reported €18 million. Photograph: Dave Meehan

A High Court action over plans by the Christian Brothers to sell part of a South Dublin secondary school’s playing grounds to builders for €18 million has settled.

Certain members of Clonkeen College’s board of management had sued the congregation of Christian Brothers, which set up the school, aimed at retaining the playing fields for as long as the school remains in operation.

The congregation had opposed the action and denied the board members’ claims that the proposed sale would adversely affect the Deansgrange-based 520 pupil school.

When the case returned before Ms Justice Carmel Stewart on Friday James Dwyer SC for the board members said the case has been resolved and could be struck out.

Peter Bland SC for the congregation said the strikeout was on consent. No details of the settlement were given to the court.

The hearing began on March 16th, and had been adjourned a number of times. The judge also made a number of preliminary rulings in the case.

The plaintiffs challenged a €18 million deal where the congregation is to sell seven acres of the playing fields to builder Patrick Durkan Snr.

Under the deal, the school was to receive €1.3 million and was to retain one area for use as a playing pitch, which the board said was unsuitable.

The plaintiffs claimed they were kept in the dark over the deal.

They claimed the sale breached a 2006 agreement with the congregation whose terms included that the playing fields would remain available for the school.

They sought declarations including that the school is entitled to the continued use of the playing fields as long as the school remains in operation.

They also sought an order restraining the disposal of the playing fields and that the purported 2006 agreement be specifically performed.

The congregation denied entering into any agreement in 2006 as alleged. If there had been any such agreement, they also claimed, it was null and void.

It argued it had a binding contract to sell the lands and intends to make significant charitable donations from the proceeds of the sale.

The playing fields at the centre of the dispute are held by trustees acting on behalf of the congregation and are the subject of a five-year licence for sporting use.

The licence was granted by the trustees to the Edmund Rice Schools Trust, which owns Clonkeen College.

“The Board of Management of Clonkeen College and the Christian Brothers are pleased to announce that they have reached an amicable agreement regarding lands at Clonkeen. This has brought an end to all legal proceedings between the parties,” a statement issued after the case said.

“The agreement will see the donation of almost four acres of land by the Christian Brothers to ERST which will ensure first-class sports facilities at Clonkeen College.”

“The development of adjoining lands can now proceed, facilitating planned funding of school facilities by the Christian Brothers.”

Board member Larry O’Gara said the school was effectively getting an additional 0.6 acres of land as a result of the settlement.

“It will allow us have a full-size all-weather GAA pitch and it will be some distance from the moderate learning disability unit.”

Asked if the board now faced a large legal bill, given a year of legal proceedings, he said. “Yeah, we’ll face that next week.”