Minister’s decision not to use historical data resulted in a disproportionate reduction, judge told 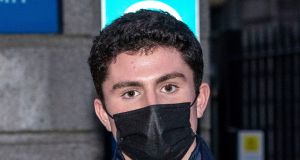 Changes made by the Minister for Education to the model used to assess calculated Leaving Certificate grades systematically disadvantaged good students attending high performing schools, the High Court has been told.

Feichín McDonagh SC, for student Freddie Sherry, said expert evidence will show the Minister’s decision not to use historical data on school’s past performances in the Leaving Cert resulted in a disproportionate reduction in the grades his client had received from his teachers.

This was because Mr Sherry attended a Dublin fee-paying school, Belvedere College, which consistently scores in the top 10 per cent of schools nationally in relation to Leaving Cert results, counsel said.

The Minister’s changes resulted in disproportionately reducing grades of good students in schools where there were clusters of students achieving top grades in high level subjects.

The result the change in how grades were calculated meant, had Mr Sherry attended a different school which did not have many high performing students, it was likely his marks would not have been reduced to the same extent, counsel submitted.

Mr Sherry’s case, which entered its second day on Wednesday, is the lead challenge over the calculated grades process and awarding of college places for 2020. About 50 other cases are on hold pending the outcome.

In opposing the case, the State and the Minister say the challenge should be dismissed on all grounds. They deny he was treated unfairly and argue there is no basis for saying the model used to calculate his grades was unlawful.

Mr Sherry, of Newtown, Celbridge, Co Kildare, claims the Minister’s decision last August to remove school historical records in the calculated grades process resulted in him being unfairly downgraded in five subjects by 55 points in his Leaving Cert. He says he was hugely disappointed when his teachers’ estimated CAO points total of 542 for him was reduced to 487 under the process and that he missed out on his first course choice, pharmacy in TCD. He claims the Minister’s direction interfered in the calculated grades process overseen by an independent steering committee was unlawful.

Counsel said Tom Doyle, a deputy principal of Belvedere College, has said in an affidavit the changes implemented by the Minister had significant effect and resulted in over 80 of its students having their grades reduced.

Mr Doyle said the total points awarded to those students following their assessment by their teachers were lowered under the process by between 20 to 50 points and this had “undermined confidence in the system.”

The Minister and State claim that students in Belvedere College received, on average, higher scores in 2020 compared to the 2017-19 period and there is no basis for any assertion Mr Sherry would have been treated more favourably in another category of school. They also maintain there is no reason to believe Mr Sherry would be in an improved position if historical school data was included.

They deny the Minister breached any commitments regarding the fairness and comparability of the 2020 grades and plead the action is non-justiciable and vague.

Mr Sherry was treated the same as every other student sitting the examinations and the respondents were entitled to change to model used to estimate grades, they say.

The system of calculated grades was brought in at short notice as an alternative to the 2020 Leaving Certificate examination which had to be cancelled due to the Covid-19 pandemic and, in the formulation of the system, steps were taken to balance the rights of all students, they say.

It is also argued any attempt to reinstate school historical data would be inappropriate or disproportionate as it would cast doubt on the results of significant numbers of students and their entitlement to college places. The hearing, before Mr Justice Charles Meenan continues.