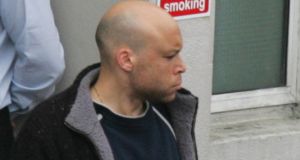 Robert Barron SC, for the State, said the transfer application is still being considered by a senior official in the Prison Service and a decision will be made by Wednesday afternoon. File photograph: Cyril Byrne/The Irish Times.

A decision whether to allow convicted murderer Mark Nash’s application for his transfer back to Dublin’s Arbour Hill prison will be made on Wednesday, the President of the High Court has been told.

Last week, the court heard Nash, who is currently in hospital, has stopped eating food and has been hospitalised due to concerns about his health.

Nash, in a letter to the prison authorities, said he had hidden the fact he has not taken any food since June 9th last.

The court was also told a psychiatric report had said Nash is suicidal.

In May, Nash initiated High Court proceedings aimed at secured his transfer to Arbour Hill, where he had already served 15 years of a life sentence for the murder in 1997 of two people in Ballintober, Co Roscommon.

Nash (42), was last April given another life sentence after being found guilty of the separate murders, also in 1997, of Sylvia Sheils (59) and Mary Callanan (61) at their sheltered housing in Grangegorman in Dublin, also in 1997.

He was initially taken to Mountjoy Prison but sought to be returned to Arbour Hill.

His counsel Hugh Hartnett SC said his client was under 23-hour lock-up at Mountjoy and his life was under threat from other prisoners.

Since the action was launched, Nash has been moved to the Midlands Prison.

When the matter was briefly mentioned before the judge on Tuesday, Robert Barron SC, for the State, said the transfer application is still being considered by a senior official in the Prison Service and a decision will be made by Wednesday afternoon.

If Nash’s application is refused, the case will proceed on Wednesday.