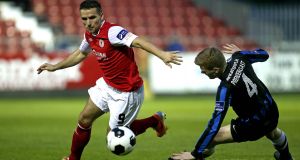 Athlone Town Football Club has secured permission to draw down a €200,000 Government grant for its proposed new astroturf training pitch following an agreement in the High Court.

The court had been asked to make an order directing Athlone Town Stadium Ltd, which developed the 5,000 seater stadium at a cost of more than €3 million, to consent to a charge being created over Athlone Town AFC’s leasehold interest in the property.

While this particular issue was resolved by consent before Mr Justice Richard Humphreys on Wednesday, an overall dispute as to ownership of the stadium rolls on to a full High Court hearing yet to be listed.

The club had secured the Sports Capital Grant for the new facility at Lissywollen, Athlone, but before it could draw down the funds , the Minister for Sport had sought the making of a charge against the 35-year lease which the club holds from the stadium company.

Mr Dully, in a grounding affidavit on behalf of the club, claimed that while the stadium company was the legal and beneficial owner of the development it was to hold title subject to a trust in favour of the club which had been founded 130 years ago and is the oldest soccer club in the Republic of Ireland.

Since 1927 its home had been St Mel’s Park, but under UEFA regulations it could no longer continue playing there. The FAI obliged the club to move to a new stadium that would meet required criteria if it was to continue playing League of Ireland football.

As a result, the purpose-built stadium had been undertaken in conjunction with the club and the community on an 8.5 acre site at Lissywollen.

The National Lottery had funded development costs to the extent of €2.8 million, together with public donations.

Mr Dully stated that St Mel’s Park had been swapped with Westmeath County Council for the new grounds at Lissywollen and claimed the title of the new stadium was to be held for the benefit of the club and local community. He alleges that the stadium company, when registering title, failed to acknowledge it was holding title by way of trust for the club.

He said ownership of the stadium became an issue in early 2013 when the major shareholder Declan Molloy, who is believed to have donated more than €500,000 to the development, claimed a right to be able to sell the stadium without any resort to the club which then began investigations to establish ownership.

The club claims a Deed of Trust was executed in April 2015 in favour of the club but a disagreement arose over the lease.

Mr Dully stated that in an effort to achieve a compromise, it had been agreed John Delaney, chief executive of the FAI, would act as mediator between the parties but terms of settlement had not been achieved.

In a full defence, the stadium company has denied all of the club’s claims.

In the High Court on Wednesday, it was acknowledged, by a consent order, that the stadium company agreed, without prejudice, to the lease being registered and that it would not be estopped from disputing the standing of David Dully to bring the overall proceedings in his own name for and on behalf of the beneficiaries of the trust.