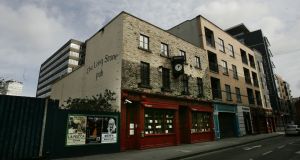 Counsel for the Long Stone pub argued the receivers’ bid to fast-track proceedings was an effort get a publican out of a “landmark premises” employing 30 people. Photographer: Dara Mac Dónaill

A High Court judge has dismissed claims by the receivers of the Apollo House site in central Dublin that a publican is in unlawful occupation of part of the site.

While it appears Noel Murray’s lease for the Long Stone pub on Townsend Street expired last month, he is entitled under the Landlord and Tenant Act 1980 to continue in occupation of the premises until his application for a new tenancy is decided by the Circuit Court, Mr Justice Max Barrett said.

Mr Murray had served a notice of intention to seek a new tenancy before the termination of his existing tenancy and, while the receivers contend his application for a new tenancy cannot succeed because he had signed a deed renouncing any entitlement to a new tenancy, those arguments must be advanced in the Circuit and not the High Court, the judge said.

In the circumstances, the High Court had no jurisdiction to fast-track in the Commercial Court the receiver’s proceedings aimed at having Mr Murray out of the premises so the redevelopment of the entire site can proceed, he held.

He was giving judgment on a preliminary issue as to whether the High Court had jurisdiction to hear proceedings by Cuprum Properties Ltd, acting via its joint receivers and managers Tom O’Brien and Simon Coyle of Mazars, in which it was alleged the lease for the Long Stone expired on October 4th.

Cuprum claimed a deed of renunciation of tenancy was signed prior to that by Mr Murray, with the benefit of legal advice.

They claimed his continued occupation of the premises is unlawful and could delay the planned sale and redevelopment of the site, with a market value of some €35m.

When the receivers brought their case to the Commercial Court last month, Rossa Fanning SC, for Mr Murray, objected, and argued the receivers’ bid to fast-track their proceedings was an effort get a publican out of a “landmark premises” employing 30 people.

Mr Murray is not a trespasser, he is entitled to apply for a new tenancy and the validity and effect of the deed for renunciation is “hotly disputed”, counsel said. His client also rejected the receivers’ claims the Circuit Court proceedings amounted to a delaying tactic as part of an effort to get more compensation.

The receivers said Cuprum’s assets include not just the Long Stone but the surrounding buildings known as the Apollo House site which, with the Long Stone, is subject of a significant re-development strategy designed to bring urban renewal and due to be “imminently commenced”.

They said it was “imperative”, for the development to be done in line with planning permission, including demolition works the receivers want to commence without delay, vacant possession be obtained. They said the site has a market value of some €35m and it is anticipated the entire site, including the Long Stone, could realise a sale price of €40m but Mr Murray’s actions were impeding the sale and causing substantial loss.

Mr Fanning subsequently brought a pre-trial application arguing the High Court had no jurisdiction to hear Cuprum’s case when Circuit Court proceedings had been initiated.

Mr Justice Barrett today upheld those arguments and said a case cannot be fast-tracked through the Commercial Court, “which is but a part of the High Court”, if the High Court has no jurisdiction to hear that case.