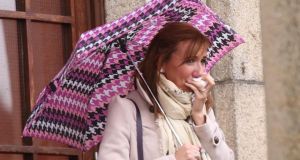 A man who killed a 60-year-old grandfather by subjecting him to a “vicious and sustained” beating after an argument broke out in an apartment has been given a life sentence after being found guilty of murder.

The jury in the case of Patrick Keating (49), of Moyne House, Grattan Quay, Waterford, returned a unanimous “guilty” verdict at the Central Criminal Court in Waterford after deliberating for just over two hours.

Keating had pleaded not guilty to the murder charge and admitted manslaughter at the outset of the trial, but his plea was not accepted by the DPP.

There were emotional scenes in court yesterday as the late Joe O’Brien’s family wept as they waited for the verdict and gasped with relief after it was announced.

One of the victim’s two daughters, Aoife O’Brien, turned to her father’s killer at the end of a victim impact statement which she read in the witness box. “May God forgive you because we never will,” she said to him.

The accused had 17 previous convictions including false imprisonment and assault causing serious harm.

Afterwards, Aoife O’Brien said on behalf of her family that her father’s life was taken “tragically, needlessly and viciously” on that night. “Today, we feel that justice has been done.

“No words can convey the devastation we have gone through in the past 18 months. Having to live with the knowledge of the horrific death my father endured, and knowing that he pleaded for his life in those final moments, will haunt us as a family for the rest of our lives.”

Keating’s partner at the time Michelle Hynes (40) and another woman, Johanna Kelly (41), pleaded guilty last week to the manslaughter of Mr O’Brien and are due to be sentenced in December.

The court heard that, during the incident, both Ms Hynes and Ms Kelly got involved in kicking Mr O’Brien.

The prosecution said that a row broke out before 10pm on April 23rd last year in an apartment rented by a friend, Anthony Marshall.

Mr Marshall told the court during the trial he saw Keating hitting Mr O’Brien a number of times with a dumbbell weight, and stamping on his head and said the victim’s last words were “please don’t hit me again”.