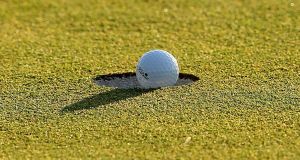 A former principal who stole €204,000 from his school for golf equipment and weekends away, has been sent to jail after his original suspended sentence was deemed too lenient.

Finbarr Boyle (39), with an address in Ballybofey, Co Donegal, pleaded guilty to five counts of theft and two counts of forgery while he was principal at Kilnaleck National School in Co Cavan between 2007 and 2012.

Boyle, who originally faced 23 counts on the indictment, was given a wholly suspended two year sentence on condition he repay €25,000 by Judge John Aylmer at Cavan Circuit Criminal Court on March 15th, 2018.

The Court of Appeal found Boyle’s sentence to be “unduly lenient” on Monday on foot of an appeal brought by the Director of Public Prosecutions (DPP). He was accordingly sentenced to 15 months and immediately taken into custody.

Court of Appeal president Mr Justice George Birmingham said Kilnaleck was a small school with five teachers and about 70 pupils. He said the theft and fraud was uncovered following the election of a new treasurer by the school’s board of management in January 2012.

Mr Justice Birmingham said the irregularities fell into a number of different categories. Boyle used the school’s Visa card to pay for meals in restaurants, golf equipment and weekends away to the tune of €66,000.

The court heard cheques were improperly drawn on school accounts amounting to €29,000 and €32,000 and that another €2,850 was misapplied from the school’s post office account.

Mr Justice Birmingham said another fraud was uncovered in relation to the School Meals Programme run by the Department of Social Protection. Kilnaleck withdrew from the scheme in 2008 but Boyle continued to submit claims to the relevant department, ultimately resulting in a theft of €73,000.

Mr Justice Birmingham said Boyle had no previous convictions and was of exemplary previous character. The Circuit Court heard character evidence from a number of people, which showed Boyle was “very highly regarded” in his local community, especially in GAA and soccer clubs.

He said the Circuit Court heard from the father of one former pupil, who was capped at underage soccer level and went on to sign for Stoke City in England. The footballer’s father told the Circuit Court that his son never would have reached the level of success he had achieved without the support and encouragement of Boyle.

The Circuit Court was told that Boyle’s career as a teacher was at an end. The father-of-four was now living in Donegal with a new wife, and young baby.

Monica Lawlor BL, for the DPP, said the money was stolen for “selfish reasons” — meals, weekends away and a “very large amount of golf equipment”.

She said there was much disquiet in a rural area that someone in a position of trust could steal €200,000 and be required to repay only €25,000.

The sentencing judge had adjourned the case for 12 months, with a view to Boyle obtaining the €25,000 figure for part restitution. But a number of matters meant the sentence was not finalised for more than two years.

Mr Justice Birmingham said it was “serious offending” by any standard and a custodial sentence was required.He said there were two injured parties, namely the “public purse” and a small rural school, the impact on which must have been “significant”.

Had the Circuit Court judge imposed a two year custodial sentence, he said it would have been appropriate. But the decision to suspend the sentence in its entirety was “unduly lenient”.