Ex-boxer sentenced for assault on waitress in Cork restaurant 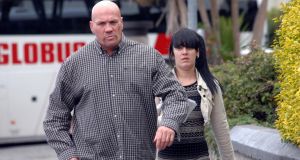 A former heavyweight professional boxer has been sentenced for five months after a judge heard how he urged his girlfriend to attack a waitress whom he felt had “disrespected” him in a West Cork restaurant. He was later released on bail pending an appeal.

Isaac, who won two professional bouts in the UK in the 1990s and was once described as “a credit to boxing”, also pleaded guilty to engaging in threatening and abusive behaviour for which he was given a two month concurrent sentence.

Isaac’s girlfriend, Siobhan Ginty (23) was jailed for four months by Judge James McNulty after she pleaded guilty to assaulting Ms Kopecka while she was similarly given a two month concurrent sentence for engaging in threatening and abusive behaviour on the same day. She was later released on bail pending an appeal.

Supt Mick Fitzpatrick of Bantry Garda Station told the court that Isaac and Ginty left in a huff after they felt that they were being ignored by Ms Kopecka on the day in question, but the restaurant wasn’t serving food at the time between 2pm and 5pm.

Ginty later rang the restaurant looking for Ms Kopecka and told her that she was coming back down as she felt that she had “disrespected her man” by not showing them a menu and she confronted Ms Kopecka in the smoking area where she began to hit her.

“Siobhan Ginty said to Lucie Kopecka ‘Do you know how much you disrespected my man ? No one disrespects by man’ before she began hitting her in the face and then hitting her on the side of the head, knocking off her earring,” said Supt Fitzpatrick.

Supt Fitzpatrick said that Isaac, who is about 6ft 4in (1.9m) tall, blocked Ms Kopecka’s escape by standing in the door and kept on urging his girlfriend to hit Ms Kopecka with the assault culminating in the kitchen where he told Ginty to “Finish her off, do it properly this time”.

Judge McNulty viewed over five minutes of the assault captured on CCTV cameras and said it portrayed in shocking detail what Supt Fitzpatrick had described. “It was a truly shocking display of thuggery and violence perpetrated on innocent people,” he said.

Isaac, who has three convictions for assault, one for possession of ammunition and one for harassment, all in the UK, said he fully accept responsibility for the assault and deeply regretted what had happened to Ms Kopecka and Mr Zilliox whom he punched once.

But Judge McNulty noted that Ms Kopecka had not returned to work at the Gateway Restaurant since the incident and it was clear that she had not only suffered physically in the assault but had also suffer psychological trauma which may be “life-changing”.

He said West Cork was a very open welcoming place where visitors could enjoy beautiful scenery and fine local produce in restaurants and those in the front line of the hospitality industry were “entitled to be protected from bullies and thugs” such as the defendants.

He noted that both accused had pleaded guilty but he described an offer of €500 in compensation gathered together since the assault as derisory as he pointed out that the maximum penalty for common assault to which both had pleaded was six months.

Giving both credit for their guilty pleas, he sentenced Ginty to four months in jail and refused a plea from defence solicitor, Ray Hennessy to suspend the sentence while he noted that Isaac was older and directing operations before sentencing him to five months in jail.

The pair were later released on bail pending an appeal.