Eight IRA accused may not stand trial until 2015

Men charged with membership of an unlawful organisation in Dublin 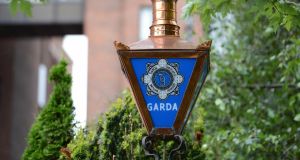 The eight men were arrested in Dublin in March as part of an ongoing Garda investigation in to the activities of dissident republicans. File Photograph: Frank Miller/The Irish Times

Eight Dublin men accused of membership of the IRA may not go on trial at the Special Criminal Court until 2015.

The men were arrested on Good Friday after a search of a commercial premises in Clondalkin as part of an ongoing Garda investigation in to the activities of dissident republicans.

The eight were all brought before an Easter Sunday sitting of the non–jury Special Criminal Court where they were charged with membership of an unlawful organisation within the State namely Óglaigh na hÉireann, otherwise the Irish Republican Army, otherwise the IRA on March 29th, 2013.

Four of the seven men — Kevin Braney, Declan Phelan, John Brock and Desmond Christie — were also among eight men arrested on July 4th after a search of a house in Tallaght as part of an operation led by members of the Special Detective Unit and Crime and Security section.

They were subsequently charged before the Special Criminal Court with membership of an unlawful organisation styling itself the Irish Republican Army, otherwise Óglaigh na hÉireann, otherwise the IRA on July 3rd last.

Counsel for the State, Vincent Heneghan BL, this morningtold the non-jury court that books of evidence have already been served on the accused men and it was agreed that the trial would take about six weeks.

He said the court would fix the trial for that date but would grant liberty to both sides to mention the case. Mr Justice Butler said that if necessary the court would “unseat” a non-custody case in order to put this case in.

Mr Heneghan said he would discuss the matter with the Director of Public Prosecutions who would have an overall view of the court list.

Mr Justice Butler told the men that if they intended to rely on the defence of alibi they must notify the prosecution within 14 days and furnish the relevant names and addresses.

He said the accused should not without leave of court call anybody to give evidence on their behalf unless 21 days before the day of the trial they give notice of their intention to do so.