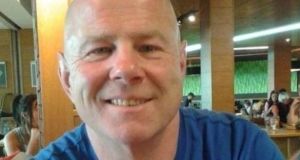 David “Daithi” Douglas (55) was shot six times as he took a meal break at the counter in his partner’s shop, Shoestown, on Bridgefoot Street, Dublin 8 on July 1st, 2016.

A man who drove a gunman to and from the gangland murder of David Douglas, who was shot six times in front of his daughter in 2016, has been been given a 10-year sentence.

The Special Criminal Court heard that getaway driver Gareth Brophy (25) later accidentally set fire to his trousers while attempting to burn out the stolen Mercedes used in the murder.

Brophy, with an address at Reuben Walk, Dublin 8, pleaded guilty before Christmas to helping facilitate the murder of Mr Douglas.

On Monday morning at the Special Criminal Court, Mr Justice Paul Coffey jailed Brophy for ten years with the final six months suspended. The judge said Brophy had a “critical role” at a “critical phase” of the murder of Mr Douglas.

He said it was “manifest from all the evidence, that David Douglas was the victim of a gangland execution-style murder”. After he was sentenced, Brophy, who was wearing a wine-coloured sweater, blue jeans and black and white runners, blew a kiss to three women in the body of the court while he was led away by prison guards.

Brophy was previously charged with the murder of Mr Douglas and his trial was scheduled to begin in the Special Criminal Court on January 13th last.

However, just before Christmas, Brophy pleaded guilty to a lesser charge of helping to facilitate Mr Douglas’s murder.

On Monday Mr Justice Paul Coffey said that, at the time of his “intricately planned” murder, Mr Douglas was working with his daughter in a shop owned by his partner. He said, shortly after 4pm on July 1st, 2016, an “unidentified” male walked into the shop with a semi-automatic pistol and shot Mr Douglas six times.

The emergency services rushed him to St James’s Hospital where he was pronounced dead. He said the gunman was driven to and from the shooting by Brophy in a stolen Mercedes before the Mercedes was burned out and Brophy and the gunman got into a Suzuki Swift.

The court previously heard that Brophy accidentally set fire to his trousers while attempting to burn out the Mercedes. The judge said Brophy’s DNA and palm print were later found in the Suzuki, while Brophy was caught on CCTV while he was a passenger in the Suzuki just after the shooting.

Mr Justice Coffey said that Brophy’s role was to get the gunman to the scene of the murder, to wait for him as he carried out the murder and then to drive him to another location.

The judge said in determining a sentence, the court must go through a “two-stage process” of deciding what the appropriate headline sentence is and then deciding whether to adjust this sentence.

Mr Justice Coffey said the offence under consideration has a maximum penalty of 15 years imprisonment. He said it was “manifest from all the evidence that David Douglas was the victim of a gangland execution-style murder”.

He said it was clear the murder was “intricately planned”, with the use of a number of cars, drivers and spotters, and that it was carried out under the control of a criminal organisation. He said there was “no evidence” that Brophy was involved in the planning of the murder.

However, he said the court “must have regard of the intentional commission of any serious crime” and the “proximity of harm done to the victim”. Mr Justice Coffey referred to “the nature and menace of the criminal organisation” and “the callous and brutal way” Mr Douglas was “repeatedly shot at close proximity, in front of his daughter”.

“The activity of the defendant [Brophy] was such that he played a critical role at a critical phase,” the judge said, adding that Brophy was “culpable to a very high degree” in what happened to Mr Douglas. He said, in these circumstances, Brophy is at the “higher end of the top end of the gravity” of the offence and he said the court approved the headline sentence of 13-and-a-half years.

The judge said the court was taking several mitigating factors into consideration, including his guilty plea. While the evidence against Brophy was “overwhelming”, the judge said his plea was of value as it saved considerable Garda and court time and expense.

Mr Justice Coffey said the court also took into consideration submissions made by Michael Bowman SC for Brophy. The judge said these included the submission that Brophy was 21 at the time of the offence, his disadvantaged background, his difficulties with drugs and his commitment to his son.

Mr Justice Coffey on Monday morning said that the offences were “relatively minor” and were not connected to criminal gangland activities. The judge then sentenced Brophy to 10 years and backdated it to the date Brophy went into custody: November 18th, 2018. He suspended the final six months on the condition that Brophy enters a vocational course while in prison.

He also ordered that Brophy enter a peace bond of €100 for a period of three years from the date of his release from prison. After passing sentence, Mr Justice Coffey said, on behalf of the court, he wished to express its “deepest sympathies” to the family of David Douglas for their loss.

Frederick “Freddie” Thompson, of Loreto Road, Maryland, Dublin 8 was found guilty of Mr Douglas’s murder in August 2018 and sentenced to the mandatory term of life imprisonment. In November 2018, Nathan Foley (22) of Rosary Road, Maryland, Dublin 8, pleaded guilty to helping a criminal organisation carry out the murder of David Douglas. He was subsequently jailed for six years.