Donegal farmer agrees to allow electricity workers on to land 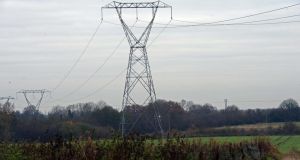 ESB/EirGrid said upgrade work needed to be carried out on the land in respect of a power line affecting the general supply in Co Donegal. Photograph: Eric Luke/The Irish Times


A landowner alleged to have obstructed important upgrade work on the Donegal electricity network system has agreed before the High Court to let works be carried out on his land. ESB and EirGrid plc had sought injunctions preventing Patrick Gallagher from interfering with the works.

Mr Gallagher, Galdonagh, Manorcunningham, undertook yesterday before Mr Justice Paul Gilligan to allow the ESB on to his lands and not to interfere with the work while both sides try and resolve issues over a claim for compensation.

Rossa Fanning, for ESB/EirGrid, said important upgrade work needed to be carried out on Mr Gallagher’s land at Listack in respect of a 110kw power line affecting the general supply in Co Donegal. Mr Fanning said the ESB had a statutory right to immediate entry to land on which its power lines were located. While a landowner could object, they may only apply for compensation and could not obstruct the work, he said. While compensation was offered, the sides were some distance apart as to the amount and his clients had come to court “as a last resort”.

The owners of 200 other properties had all agreed to allow the ESB on to their lands and Mr Gallagher was the only landowner who had objected, Mr Fanning added.

Mr Gallagher, representing himself, said he had been in dispute with the ESB over compensation for work on the lands in the 1990s. The had ESB previously caused damage to his land, he claimed. He told the court he was a sheep farmer and a “reasonable man”. He believed he was entitled to compensation and if that was paid, had no problem letting the ESB on to his land.

Following an invitation from the judge, Mr Gallagher and the ESB agreed outstanding issues would go to arbitration if they could not agree a figure for compensation. After receiving an undertaking from Mr Gallagher to allow the ESB on to his land, the judge adjourned the matter to June.