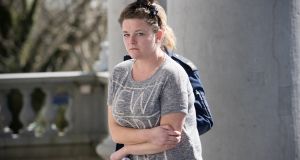 A judge on Wednesday jailed a woman for six months for the assault on two paramedics when coughing in their direction in the back of an ambulance and telling them “I have the virus”.

Blunnie (30) of Pella Road, Kilrush had pleaded guilty to the assault of paramedics David Meaney and Frank Greaney at Dunogrogue, Killimer, on April 10th.

Sgt Aiden Lonergan stated the two paramedics were within one metre of  Blunnie when she coughed in the confined space of an ambulance and stated she had the virus.

Judge Durcan said: “On that date, this country was in a maelstrom in the middle of the worst public health crisis that has ever been experienced here.

“Ambulance service personnel were laying their lives on the line day in and day out to assist people who were genuinely ill,” he said.

Judge Durcan stated that in her drunken, selfish stupor, Blunnie had an ambulance sent for her. He added that Blunnie, who has 43 previous convictions, “has an appalling record”.

Blunnie told the court previously: “It was just a joke. I didn’t mean to do it” and later added “I don’t have the virus”.

Solicitor for Blunnie, Monica Roche, told the court her client sincerely apologises to the paramedics and the gardaí for her actions.