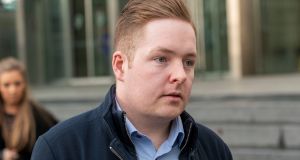 A Trinity student has admitted he became aggressive and spat at a Garda during an “appalling” incident following a row over a taxi fare.

He instructed his barrister to apologise on his behalf and was given a chance to avoid a criminal conviction as well as a sentence. The common assault offence can result in a conviction with a six-month sentence and a fine.

The case was adjourned until a date in February for a Probation Service report to be furnished to the court.

Garda Sergeant Damian Beakey told Judge Ann Ryan the accused entered the station with a taxi driver because there had been a dispute over a fare.

He was “extremely intoxicated and aggressive to gardai from the start”, Garda Sergeant Beakey said.

The court heard gardaí tried to calm him down but Ó Snodaigh “squared up” to one of the officers in a threatening manner. Garda Sergeant Beakey said o Snodaigh “heavily resisted”.

He was restrained and arrested and brought to the custody foyer but refused to give his details to the station’s jailer. He remained uncooperative, the court heard.

He was immediately brought to a cell where his aggressiveness continued and he refused to take off his belt and refused to allow himself be searched. “And at this stage he spat out at Garda Niall Carolan,” the court heard.

He was then searched and charged before he was released into the custody of his father, Aengus Ó Snodaigh.

The politician, along with the accused’s mother and fiancee, were in the public gallery. Ó Snodaigh has no prior convictions.

Garda Sergeant Beakey agreed with defence barrister Emer Ni Chuagain that her client had not come to further garda attention. He accepted it was unlikely he would come to Garda attention again.

Ó Snodaigh had also brought €500 to court to be donated to the charity Feileacain (Stillbirth and Neonatal Death Association of Ireland), which was nominated by the prosecuting Garda.

Testimonials and reports furnished to the court which heard he had engaged in voluntary charity work.

Counsel said the testimonials spoke of the type of man he was and the incident was “out of character”.

He had also been struggling with a prior difficult incident and had attended counselling. The barrister said Ó Snodaigh had told her he had not consumed alcohol in that manner before.

She said he was unlikely to come before the courts again and wanted to travel to the United States on a graduate visa after he finished his master’s degree.

He had taken an “unusual level of alcohol” and never wanted to put himself in that situation again, the barrister said, pleading for leniency.

Judge Ryan asked if he was addressing his alcohol difficulty, adding, “obviously that is a big factor”.

Counsel said Ó Snodaigh dealt with it himself; normally he would not drink that much and he now drank small amounts.

Judge Ryan said the incident was triggered by the amount of alcohol he had taken, and he had a good future ahead of him.

“But the incident itself was appalling and your behaviour was completely and utterly unacceptable,” she told Ó Snodaigh who did not address the court.

Garda Carolan was present for the hearing but did not wish to give a victim impact statement.

Judge Ryan adjourned the case until February 18th next for a report on Ó Snodaigh’s participation in a restorative justice programme through the Probation Service, and the donation to charity.

It would give him time to reflect on his behaviour and the restorative justice programme was especially beneficial for cases like this, she said.

Judge Ryan said the case will be struck out if there was a positive report.