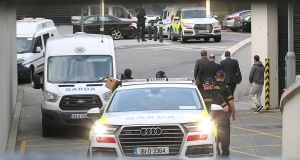 Three men charged in connection with a large weapons seizure in Dublin have have been remanded in custody.

They were brought by armed gardaí in unmarked cars to appear before Judge Anthony Halpin at Dublin District Court on yesterday afternoon.

Declan Brady (50), Johnathon Harding (44) and James Walsh (33) each face the same three charges, under the Firearms Act, for unlawful possession of five revolvers, 20 rounds of ammunition and a silencer on January 24th at a unit in Greenogue Business Park, in Rathcoole, Co Dublin.

Members of the Garda Drugs and Organised Crime Bureau and the National Bureau of Criminal Investigation arrested the men after a raid on the warehouse .

They made no application for bail and were remanded in custody to appear via video-link at Cloverhill District Court next Wednesday.

The men made individual appearances and did not address the court. They have not yet indicated how they will plead, and the judge was told that further serious charges could be brought.

The charges state the firearms were Smith & Wesson, Zastava and Rossi make, five- and six-shot revolvers.

Det Sgt Emmet Casserly told the judge that Mr Brady, of The Park, Wolstan Abbey, Celbridge, Co Kildare replied “no” when he was charged at 1.14pm yesterday. He said there would be an objection to bail.

Defence solicitor Anarine McAllister told the court there was no application for bail at this stage and asked that her client receive medical treatment in custody. The judge ordered that all necessary medical attention would be afforded to Mr Brady .

The second defendant, James Walsh, of Neilstown Drive, Clondalkin, Dublin 22, was charged at 1.24pm, after which he “made no comment to each charge” , Det Sgt Michael Cuffe said. Mr Walsh was aware that there would not be a bail application at this stage, which was confirmed by defence barrister David Staunton.

Mr Staunton asked if that case could also be adjourned until Wednesday. An application for legal aid was deferred to allow time for a statement of means to be prepared.

The third man before the court was Johnathon Harding, of McNeill Court, Sallins, Co Kildare. Det Sgt Paul Curran said Mr Harding made no reply when charged at 1.06pm. Free legal aid was granted to him after the judge noted that there was no objection from gardaí.