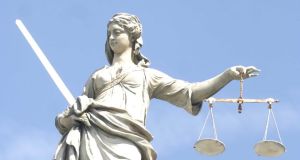 Dublin District Court has heard Gerard O’Neill (31), of Orchid House, James Street, Dublin 8, was “foaming at the mouth” when he resisted arrest and threatened officers who responded to a 6am report of intruders on the grounds of drummer Larry Mullen’s home last October.

Sentencing of a Dublin man who was found guilty of trespassing at the home of U2 drummer Larry Mullen has been adjourned.

Dublin District Court has heard that Gerard O’Neill (31), was armed with a golf club and threatened gardaí he would infect them with HIV.

His case was put back for three weeks as a decision is awaited on whether a suspended sentence O’Neill had already received would be activated as a result of this incident.

O’Neill, of Orchid House, James Street, Dublin 8, was “foaming at the mouth” when he resisted arrest and threatened the officers who responded to a 6am report of intruders on the grounds of the drummer’s home.

He had been found guilty earlier of trespassing at Claremont Lodge, Claremont Road, Howth, Co Dublin in a manner causing fear in another person, on October 19th last.

The 31-year-old was also found guilty on other charges in connection with the incident: resisting arrest and production of a golf club as a weapon capable of causing injury. He was also guilty of failing to appear in court on three occasions, the court held.

Judge Ann Ryan remanded him in custody. She deferred ruling on the remaining charge of threatening to kill or cause serious harm to Garda Stephen Donnelly and Garda Aishling O’Neill, who caught him at Larry Mullen’s property.

During the trial earlier, security guard Dan Suchan told the judge the entrance to Claremont Lodge has a sign warning “trespassers will be prosecuted” and saying “private”.

He was in the security hut and heard a beep from a motion sensor and looked at his CCTV monitor to see a man in bushes, while a woman was also present.

He went out and tried to speak to the them but after getting no response he called gardaí. He said it was dark and he had concerns property would be damaged, a fire started or somebody would be “jumped”.

Garda Donnelly said he arrived with Garda O’Neill and they walked from the security hut to the main road to look for the intruders.

They noticed bags on the road and thought they belonged O’Neill, whom they had encountered earlier in Howth village.

Garda Donnelly said O’Neill came out of bushes and “he had a golf club which he held aloft”.

He feared O’Neill would use it as a weapon against him and his colleague and yelled at him several times to drop the club.

“I had to draw my official baton,” he had said. Garda Donnelly said that eventually O’Neill put it down.

The gardaí then noticed O’Neill’s partner emerging and she was arrested.

At this point O’Neill became aggressive and “threatened to kill gardaí”. Garda Donnelly said O’Neill shouted, “I’ve HIV,” and that he threatened “to spit at us and bite us to infect us”.

Garda O’Neill said he was “foaming at the mouth” from “sheer anger” and she did not believe he was under the influence of any intoxicant at the time.

The gardaí told the court there was a struggle and they restrained him against a wall. They had to keep his face away from them because he continued to say he would infect them by biting them.

Garda O’Neill said she was in fear when he had the golf club held high and when he “looked at me straight in the eye”.

Two more officers arrived to help in the arrest and he was taken to Clontarf Garda station in a Garda van, the court has heard.

The case resumes on July 28th.