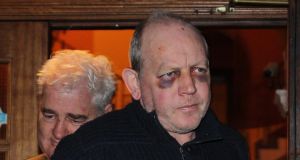 Pearse McAuley: has been ordered to appear before Cavan Circuit Court next Wednesday

Republican Pearse McAuley has been ordered to appear before Cavan Circuit Court next Wednesday in connection with an alleged assault on his wife and making threats to others.

Mr McAuley (50) appeared before a sitting of Cavan District Court yesterday. He is facing four charges, including threatening to kill or cause serious harm to Pauline Tully McAuley at Keelderry, Kilnaleck, Co Cavan on Christmas Eve. He is also charged with assaulting Ms Tully McAuley causing her harm on the same occasion.

The offences are all alleged to have been committed on the same day.

Mr McAuley was remanded in custody to Castlerea Prison following his initial court appearance in Co Cavan on December 26th.

He did not speak during the five-minute hearing.