Michael McDonagh (24), from Knock, was found dead in Carrabeg Estate in Swinford 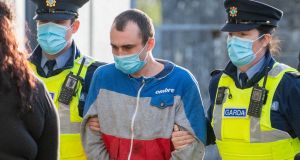 Matusz Batiuk, with an address at Carrabeg, Swinford, Co Mayo arriving at Castlebar District Court where he was charged with the murder of Michael McDonagh. Photograph: Keith Heneghan

A 31-year-old man has been remanded in custody charged with the murder of Michael McDonagh at a housing estate in Swinford, Co Mayo.

Matusz Batuik, with an address at 1 Carrabeg Estate, Swinford, appeared before Judge Fiona Lydon at Castlebar District Court charged with the murder of MrMcDonagh (24) on Monday.

She said that at 11.52pm on Tuesday, she arrested the accused at Castlebar Garda Station and at 12.20am on Wednesday, she formally charged him.

In reply to the charge, the accused replied ‘No comment’.

The court was told that the State application was for a remand in custody to Harristown Court at Castlerea Prison on Friday at 10.30am.

Judge Lydon acceded to the request for a remand in custody.

The accused was represented at the hearing by solicitor Cathy McDarby, who requested appropriate psychiatric treatment for the accused while in custody.

She asked that he be placed in protective custody for his own safety while in prison and also requested free legal aid.

Judge Lydon agreed to the requests for psychiatric attention and free legal aid.

She said she would leave the matter of protective custody to the prison governor.

The accused, who was dressed in a blue, red and grey sweatshirt, did not speak during the brief hearing. He had the services of an interpreter throughout the proceedings.