Man in custody over charges linked to high-speed pursuit 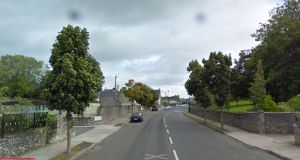 Stephen Coveney (25) was arrested by gardaí after he got caught up in match traffic attending the Cork county senior hurling semi-finals at Páirc Uí Rinn on the Boreenamanna Road (above) in the city. File photograph: Google Street View

A man has been remanded in custody after being charged in connection with a high-speed pursuit through Cork city on Sunday.

Stephen Coveney (25) was arrested by gardaí after he got caught up in match traffic attending the Cork county senior hurling semi-finals at Páirc Uí Rinn on the Boreenamanna Road in the city.

Mr Coveney, of Churchfield Green in Churchfield, was brought before Cork District Court on Tuesday where he was charged with a total of six offences arising from the Garda investigation into the pursuit.

Det Garda Padraig Harrington gave evidence of arrest, charge and caution and told Judge John Cheatle that Mr Coveney made no reply to any of the six charges when they were put to him after caution.

Mr Coveney faces an endangerment charge which alleges he drove his Mitsubishi Lancer at Sgt Noel Madden, reversed into a marked Garda car driven by Sgt David Callaghan and hit a parked Toyota which in turn hit a Volkswagen on Boreenamanna Road.

He was further charged with attempting to mount a footpath before coming to a stop after hitting a pole. The charges allege that his actions created a substantial risk of death or serious harm to others.

Mr Coveney also faces a charge of endangerment for driving through traffic lights, which had turned red, at the junction of Connolly Road and Pearse Road in Ballyphehane at 110km/h, thereby creating a risk of death or serious harm to others.

Mr Coveney was also charged with two counts of dangerous driving at Tory Top Road in Ballyphehane and Well Road in Douglas and with driving without a driving licence and driving without insurance at Boreenamanna Road.

Defence solicitor Donal Daly said his client was not applying for bail at this point and Judge Cheatle remanded Mr Coveney in custody at Cork Prison to appear again at Cork District Court on Thursday via video link.