Man charged with driving at 120km through Killarney 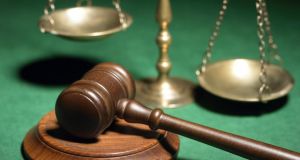 Three men, one in custody since early on Saturday after allegedly driving at 120km/hr through Killarney and breaching red lights, during the May bank holiday rally weekend, were warned they could face jail at Killarney District Court.

The three appeared before separate special courts held through the weekend to deal with dangerous driving surrounding the annual Rally of the Lakes and had been remanded in custody on Tuesday in Killarney. The three were granted bail .

Farmer and cattle dealer William Dunne (25), of Templemore Road, Erris, Portlaoise, Co Laois, was described by Judge James O’Connor as “the most serious” offender of the group. He was arrested on Friday night and brought before Killorglin court on Saturday accused of driving at high speed through red lights in his Lexus car and doing a 180 degree turn. He was doing speeds of 120km , the court was told. Gardaí pursued Mr Dunne, who circumnavigated cars waiting at red lights, the court was told.

Mr Dunne had never been in custody before but the State objected to bail and the judge jailed him for the weekend.

On Saturday night at a special court sitting in Killarney, Colm Walsh (20), of Polerone, Mooncoin, Co Kilkenny, was charged with dangerous driving at Minish, Killarney, on Friday night May 1st.

A garda in an unmarked Garda car, said he saw the defendant doing a “doughnut” in the middle of the Cork to Killarney road at 11.30pm. Between 30 and 40 cars had gathered at the scene.

He was on bail for a number of other traffic charges in Thurles, the court was told.

His solicitor, Pádraig O’Connell, said his client had nothing to do with an earlier incident on Sunday at Gleesk, Kells, during which rocks were thrown at Cahersiveen gardaí by a crowd of “boy racers” gathered to perform stunts.

An application by Mr O’Connell for bail for all three was granted , with consent from the State. However the judge warned Mr O’Connell that there were several ways open to him to deal with such offences . “One of the options” was custodial, Judge O’Connor warned.

A fourth man appeared on a summons before the court also charged with dangerous driving during the rally weekend after crashing his four-wheel drive into a roundabout. Joe McElligot (23), of Ballinorig, Causeway, crashed into the Park Road roundabout at Park Road, Killarney, at around 9.30pm, the court was told.

“While it happened during the weekend of the rally, it was more an accident than anything else,” Inspector Tony Sugrue said. Gardaí had no objection to bail, the inspector said.

Mr McElligot said he did not know what happened to cause the collision but there was only “cosmetic damage” to his front bumper.

All four matters have been adjourned and copies of Garda statements and other documents are to be given to the men’s solicitor.